Note: This is day 28 since the NHL and AHL hit the pause button on their respective 2019-20 seasons.

Winnipeg Sun: Chevy not shutting down engines, yet. Paul recaps the conference call the Jets GM held on Tuesday afternoon. 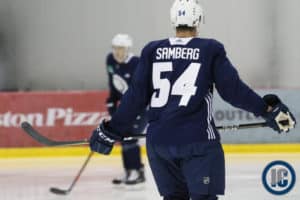 Winnipeg Sun: Morrissey ‘on board’ for neutral site games. While Morrissey would prefer the games to be played in Winnipeg in order to award a Stanley Cup I suspect players would be happy playing just about anywhere.

Winnipeg Free Press:  Like rest of hockey world, Chevy in neutral, waiting for light to change.  (Paywall).  Work must continue even if it is being done remotely.

Winnipeg Free Press:  Samberg feels time is right to make jump to Jets.  (Paywall).  Given the number of players from the University of Minnesota-Duluth turning pro next season it is probably as good a time as any.

Sportsnet:  Samberg sees ‘a lot of opportunity’ with the Jets.  Especially next season there is going be plenty of opportunity for the big left side D-man.

The Athletic Winnipeg:  Jets sign Dylan Samberg but where he begins his pro career remains unclear.  (Paywall – 90 days of free access option).  Ken writes about the newly signed prospect with some insight from his college coach.

Duluth News Tribune: Hermantown’s Samberg leaving Bulldogs early, signs with Winnipeg Jets. Matt has covered the prospect for the past few years and has as good a grasp as anyone on the player the Jets are getting.

Sportsnet: Best moments from 2019-20 so far.  From the epic Heritage Classic vs. Flames to monster years from Scheifele and Connor, all the best moments from the Winnipeg Jets 2019-20 season… so far.

Jets TV:  Conference call with Josh Morrissey.  The Jets top-pairing D man spoke for about 30 minutes on Tuesday on a wide-variety of topics including what it meant for him to wear an ‘A’ this season for Winnipeg.

Illegal Curve: Coach Pascal Vincent lauds development of prospects Mikhail Berdin and Leon Gawanke.  The second and first-year pros were picked out by the Moose bench boss as deserving recognition for their development path this season.

TSN:  No Olympics gives NHL ‘broader window’ to play in summer.  NHL commissioner says the league is still weeks away from making a decision on whether to drop the puck again, Frank Seravalli writes.