Berdin and Gawanke have developed nicely under Coach Vincent

After extolling the virtues of Jansen Harkins on Monday my chat with Moose bench boss Pascal Vincent moved on to two prospects whose development this season impressed him.

First up was Jets 2016 6th rounder Mikhail Berdin. The second year pro was expected to split duties this season with Jets 2013 2nd rounder Eric Comrie but that plan went awry when Comrie was claimed off waivers by the Coyotes to start the season.

“Berdin played really well. When Eric Comrie got claimed off waivers it was a shock to everyone. But then the pressure fell on Birdy quite a bit. He’s a confident guy don’t get me wrong but still he’s a young player. In this position as a goaltender there is quite some pressure. His first few games were OK and then he picked it up. When we were on the run and we were winning game after game this year before Christmas he was the guy stopping the puck and he was one of our best players night after night. He’s a guy I really liked his improvement.” 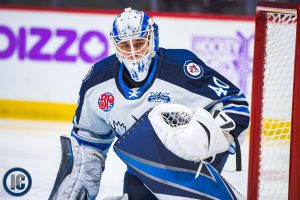 The win streak that Vincent referenced above was Berdin going 9-1-0 in November. After he was pulled in Milwaukee (his one loss in the month) he won seven straight games for Manitoba. In those seven games he stopped 253 of 259 shots for a 0.977 save%.

Now Berdin had some serious adventures in goaltending this season (kicking pucks, throwing hits & shooting for empty nets) and while that may have caused some coaches to pull out their hair in frustration, Coach Vincent saw it as an opportunity to harness the skills which make Berdin such a unique goalie.

“He was quite reckless at playing the puck earlier in the season, cost us some goals and people asked me if I was going to stop him. No I am not going to stop him. We need to find that balance, we need to find that line. We don’t want to take it away from him. He’s so good at it. We can’t put him in a box because he’s not that type of player. He’s a guy that thinks outside the box. He plays the game differently. That’s an asset. We don’t want to change him into a regular goalie. He’s made some mistakes and he’s going to do some more when we play again but there was an improvement there at when and how to play the puck. If he keeps doing things the right way I think he’s on the right path.” 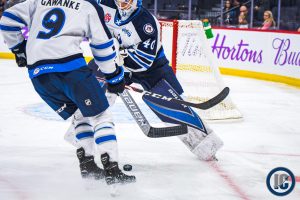 The other player mentioned by the Moose bench boss was 2017 5th rounder Leon Gawanke. The German born defenceman is in his first year as a pro after spending three seasons with the Cape Breton Screaming Eagles of the QMJHL. In 48 games with the Moose, Gawanke had four goals and 22 assists for 26 points which puts him fifth in scoring for Manitoba and the top blueliner on the team in terms of points.

“At first he was in a rotation and by the end of the year he was running our top power play. Maybe a little bit too soon but that’s what we do. We put players in a position they may not be ready for but he got huge mileage this year as far as execution and running a power play. He learned about the energy that it takes to play at this level and to be a positive player game after game, the physical condition that you need to be in, in order to achieve that. I think for him it was a great experience.” 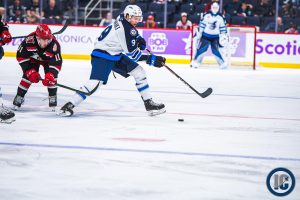 “I knew he was good with the puck and making the first pass but he’s made some great plays in the season under pressure. He’s a guy that is willing to take hits to make plays. Breaking the puck out and he got better as the season went on.”

Regardless of whether the 2019-20 season continues or not these two young Jets prospects will be around for some time and it will be interesting to see how their development continues to progress whenever hockey resumes.