Note: This is day 22 since the NHL and AHL hit the pause button on their respective 2019-20 seasons.

The Athletic Winnipeg: One-on-one with Jason Jaffray: On retirement and the call that changed the course of his career. (Paywall – 90 day free trial). Ken had a chance to catch up with the Alberta product who played games for the Moose 1.0, Jets 2.0 and the IceCaps now that he has called it a career.

Sportsnet: Five most important goals in the modern Winnipeg Jets era.  Sean takes a look back and picks his top five.  What say you? 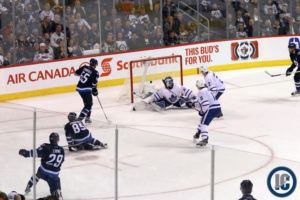 ESPN: The feel-good stories of the season for all 31 NHL teams.  No surprise that Connor Hellebuyck is the Jets pick.

The Athletic: The 2020 NHL broadcast rankings: The best and worst markets to watch the games. (Paywall – 90 days free option).  The Jets broadcast team finishes smack dab almost in the middle of the NHL with the 15th ranked broadcast.  Dennis (Beyak) gets high marks, especially out of market, while his sometimes sidekick Kevin Sawyer doesn’t fare quite as well.

TSN:  Days are ‘starting to mesh together’, ‘chomping at the bit’ to get back on ice.  Jets forward Mark Scheifele joins Sara Orlesky to discuss what life has been like for him since the pause of the NHL season and what has been the biggest adjustment, what he’s been doing to keep up some level of training and more.

TSN:  Experience helping Connor evolve into an elite goal scorer.  What have we learned about the Jets this season? TSN reporter Sara Orlesky breaks down the challenges the team has faced, specifically their roster issues on the blue line, discusses Kyle Connor’s emergence as an elite goal scorer and how it impacts Patrik Laine’s game and who the future is defensively for Winnipeg.