Affiliate news – St. John’s IceCaps: Meech’s return is all the rage. Crunch time for IceCaps. Crunch are led by a man, Trent Yawney, who won’t be around for long.

Jets official site:  Plays of the Year – Round 1 Match-up 3.  Slater vs. Wheeler.  Does Jim Slater’s Movember look give him the edge?

Winnipeg Free Press:  Jets sticking to long term game plan.  The Jets GM gives his insight into the Jets group of prospects and how the team is committed to building with the long term future in mind.  According to Jeremy Rutherford of the St. Louis Post-Dipatch, who was on the Illegal Curve Hockey Show on TSN Radio 1290 last week, the Blues have undergone a 6-7 year re-build in order to get St. Louis running smoothly again.  Do Jets fans have that type of patience? 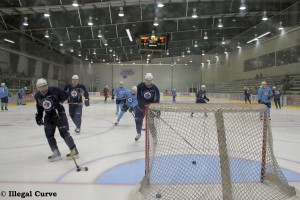 Winnipeg Free Press:  Jets put Winnipeg on map with investors.  While economic development in our province has been strong for awhile, the Jets are the icing on the cake, and are just an added bit of incentive when closing a deal.  It does help that the return of NHL hockey has major cities like New York and Chicago talking about Winnipeg once again.

The Telegram:  Meech’s return is all the rage.  Has to help the IceCaps that they have a D-man of Meech’s quality playing healthy hockey right now.  If he can remain healthy for the entire playoffs and have a good rehab he will increase his chances of playing NHL hockey next season.

CBC:  Crunch time for IceCaps.  Tonight is the all important Game 3 of the Best of 5 series and the first home playoff game for the St. John’s IceCaps.

The Post-Standard:  Crunch are led by a man, Trent Yawney, who won’t be around for long.  Interesting that the team and the coach will be forced to part ways at season’s end.  The ways of the AHL/NHL relationship can be quite strange at times.

Washington Post:  Keys for Capitals in Game 7.  That is a long list of things to accomplish, but when you are looking to dethrone the Stanley Cup champs, it is never an easy prospect.

Washington Post:  Caps enter Game 7 as confident bunch.  Many hockey pundits did not give the 7th place Capitals much of a chance in this series.  Any team in the NHL can beat another on any given night and the players on Washington are looking at tonight’s game as just another NHL game.

Boston Herald:  Bruins must answer as elite fall.  If the Bruins lose to the Capitals, depending on what happens in the NJ/FLA and NYR/OTT series, this could be the most teams in the 2nd Round which have never won a Stanley Cup (The Flyers would be the lone team with a championship).

Illegal Curve:  Stanley Cup Nightly recap.  If you missed any of the stories from last night’s NHL action we have you covered.  Best of the night involves the Florida Panthers President getting into a twitter battle with Devils fans.