Note:  The Jets practiced yesterday afternoon in Philadelphia as they got ready for today’s matinee against the Flyers.  Puck drop is at 12 noon CST and following the game check back here for all the post-game reaction.

Note II:  The Moose are certainly not in a position to be splitting series as they dropped last night’s game 4-1 to the Rocket and they slip to 24-32-0-0 on the season. They will end the three-game road trip tonight in Belleville against the top team in the Eastern Conference.  Puck drop at 6 PM CST.

Note III:  The trade deadline is fast approaching on Monday, February 24th at 3 PM EST. Late in the afternoon on Friday word broke that the Jets had dealt a conditional 4th round pick to Vegas for Winnipegger Cody Eakin.  GM Kevin Cheveldayoff held a conference call on the trade which you can listen to here.

Note IV:  Tune in for an earlier than normal version of the Illegal Curve Hockey Show which kicks off Jets gameday on TSN 1290 Winnipeg at 7 AM CST.  We’ll be bringing you two hours of Winnipeg Jets and NHL talk.

Winnipeg Sun:  Jets prospect Dylan Samberg chasing history first, Jets dream next.  The prospect that most Jets fans have been focused on since he was drafted.  Once his college season ends (preferably for him with a third straight title) it will be a very interesting time in the young man’s life.

Winnipeg Sun:  Jets land Eakin in a deal with the Golden Knights.  The team more Manitoba than the Jets decides to part with one of their numerous Manitoba based players.

The Athletic Winnipeg: In trading for Cody Eakin, the Jets have added depth down the middle. Is Kevin Cheveldayoff done dealing now? (Paywall).  Ken provides insight into the deal and examines whether the team is likely to keep things interesting before Monday. 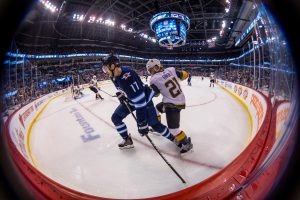 Winnipeg Free Press:  Jets admire Eakin’s moxie, veteran presence.  (Paywall).  While he hasn’t had a great season it is clear the team feels he can add something to their group.

Winnipeg Free Press: D-man DeMelo is Mr. Dependable. (Paywall).  There appears to be a common theme for the London, Ontario product.

Sportsnet: 2020 Winnipeg Jets Trade Deadline Primer.  A look at the needs, pending free agents (both RFAs and UFAs), potential assets to move and a “I don’t think Winnipeg should…”.

TSN: Primary targets for Canada’s West teams. With each Canadian NHL team in the Western Conference battling for a playoff spot, the upcoming trade deadline takes on that much more significance for the Oilers, Flames, Jets and Canucks. Frank Seravalli and Craig Button discuss the primary targets for each team. Talk about Winnipeg starts at the 4:30 mark.