Note:  The Jets secured a big two points last night as they concluded their season series with division rival Chicago picking up a 3-2 win.  It was a busy weekend for news as we learned on Saturday that Bryan Little is done for the season as well Adam Lowry and Mathieu Perreault remain week-to-week.  Perhaps with that in mind bench boss Paul Maurice tossed Andrei Chibisov into the lineup for his NHL debut on Sunday and also unveiled the Class of 2015 line (as we referenced them) who ended up having a big impact on the contest.  Today, the Jets are scheduled to practice at 11:30 AM out at the IcePlex so stay tuned for the Practice Report which will have all the latest news and audio.

Note II:  The Moose will look to conclude their six game homestand with a big win over the Milwaukee Admirals in their re-match this afternoon at Bell MTS Place. It will be a tall task as Milwaukee has the best overall record in the AHL right now but Manitoba is desperate for points so a win is what they need.  I will be joining play-by-play voice Daniel Fink in the broadcast booth to provide colour analysis so join us for the pre-game show at 1:45 PM on TSN 1290 Winnipeg followed by puck drop at 2 PM.

Sportsnet:  Jets Trade Tiers: Will Winnipeg trade a star forward to bolster defence?  You can read it but they reference Adam Lowry as a winger, Sami Niku is apparently a right shot D man and the article suggests Dmitry Kulikov is still signed after this season. They also list waiver pickups as assets worth mentioning so reader beware.

The Athletic Winnipeg:  With Bryan Little out for the season, Jets need Mark Scheifele to play a starring role.  (Paywall).  Plenty on the shoulders of number 55.

Winnipeg Sun: Class of 2015 propels Jets in crucial win over Blackhawks.  This almost has a GST type feel to it although it is a small one-game sample size so we shall have to wait to see if the trio stick together. But with their coach clearly liking what they brought he will likely give them some type of shot.  Scott provides you with his post-game recap.

Winnipeg Sun: Jets captain ‘gutted’ for friend, teammate Little.  Considering the friendship Wheeler spoke about during his availability it isn’t hard to understand why he would be so upset at the news.

Winnipeg Free Press:  Beaulieu’s goal gives Jets 3-2 win over Blackhawks.  (Paywall).  When Beaulieu took the imaginary monkey off his back it was his first goal of the season and first as a member of the Jets organization.  Jay (on his birthday no less) recaps the game action from his spot inside Bell MTS Place. 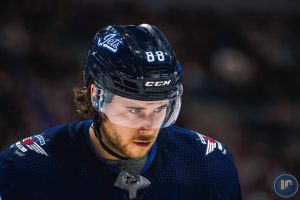 Winnipeg Free Press:  News of Little gone for the season hits hard for Wheeler.  (Paywall).  And as Wheeler acknowledged it isn’t just Little the person that they are missing but Little the veteran centre.

Chicago Sun-Times:  Blackhawks end long, frustrating road trip with another loss to Jets.  Always good to gain insight into the game from the perspective of a writer that covers the Jets opposition (and who also appeared on Saturday’s Illegal Curve Hockey Show).

TSN: Jets’ ability to attack the net aided them in victory.  The Jets came through with a big two points against the Blackhawks as they continue to claw their way into the wild card picture. TSN Hockey analyst Dave Poulin examines how their aggressiveness and depth scoring helped them to the victory.