Ever since IC’s Ezra Ginsburg tweeted:

The line of Tanner Glass, Jim Slater and Chris Thorburn has become known as the GST Line.

What began as a twitter conversation between Illegal Curve’s Ezra Ginsburg and TSN 1290’s Jay Richardson has taken on a life of its own.  The name has spread to the locker room, on the radio, and in print. 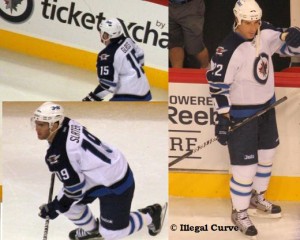 Ezra & Jay were determined to find them a proper name because of the line’s work ethic and playing style. While watching the GST, it was easy to tell that they were on the same page.  Tanner Glass says that chemistry has been easy to find for them:

“We all have the same mindset out there, it’s about making easy plays and being on the defensive side all the time and being a responsible line, it’s been easy to find chemistry with those two.”

If the GST Line were a country, it would have a motto or a slogan, a motto by definition (taken from Wikipedia, obviously)

“a phrase meant to formally summarize the general motivation or intention of a social group or organization.”

“we’re just out there going hard all the time, we try not to take any shifts off”

From the beginning of the year, Coach Claude Noel has talked about each player finding their “A” game. Jim Slater says that for them, their “A” game is very simple:

“Playing great defensively, winning faceoffs, killing penalties, putting pressure on the other team’s defense and top lines, and getting pucks to the net. It’s a real simple recipe but its worked for me over the years, so I want to continue to do it.”

Jim Slater has been cleared to return from a concussion, and will hope to reunite with the rest of the GST line tonight in Philadelphia.