The Jets head out on a season long road trip which begins tonight against the Philadelphia Flyers at the Well Fargo Center. 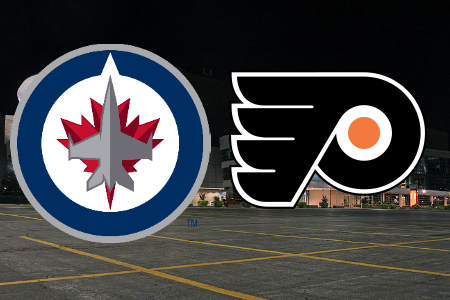 The Story: The Winnipeg Jets better get used to playing on the road because tonight’s game versus the Philadelphia Flyers will be the first of seven away from the sweet confines of the MTS Centre (the Jets don’t play at home again until November 10th against the Florida Panthers).

Winnipeg (two wins in their first eight games) rolls into Philadelphia to play a Flyers team that was embarrassed 5-1 by the Montreal Canadiens less than 24 hours ago. Led by Daniel Briere, Claude Giroux and yes, 39-year-old Jaromir Jagr, the Flyers will look to rebound from a weak performance in the second of back-to-back games. Meanwhile, the Jets are just looking for wins, and specifically, wins on the road, where they are zero for four this season.

The Jets lost their last game 2-1 to the New York Rangers on Monday night at home, but it was a tight game that they could have easily won ( The Jets outshot the Rangers 28-17). Because the Jets are not blessed with natural goal scorers like Giroux or Jagr, they have to find creative ways to win close games and cannot afford to take bad penalties or play lazily. Against the Rangers, a third period penalty and poor backchecking contributed to Ryan Callahan‘s eventual game-winning goal.

Having said that, the Jets will need more offensive production tonight, especially from their top line. The Andrew Ladd–Bryan Little–Blake Wheeler triumvirate has only put five points on the board in eight games, which is simply not acceptable. Although no one expected this line to score five goals every night, Little and Wheeler have yet to score any goals at all, which has to be troubling for Head Coach Claude Noel.

There is some good news for the Jets however as 20-year-old second-year forward Alexander Burmistrov enters tonight’s game against the Philadelphia Flyers on a red-hot five-game points streak (2 goals, 5 assists, 7 points in 8 games). The duo of Burmistrov and Nikolai Antropov (6 points in 7 games) has been sensational and struggling 20-year-old forward Evander Kane has played his best hockey with the pair.

Injury Notes…. Jets centre Jim Slater is available for tonight’s game against the Philadelphia Flyers. Slater missed the last two games with an upper-body injury. He leads the Jets with three goals in six games….. Flyers All-Star Defenseman Chris Pronger is out up to three weeks after he took a stick in the eye against the Toronto Maple Leafs on Monday night……