Note: It was an odd one last night at Bell MTS Place.  The Jets were held without a shot for over 23 minutes between the 1st and 2nd periods.  They scored two quickly in the 2nd only to see the Sharks do the same in the 3rd.  Lots of chances to tie it as the 3rd wound down but instead they lost 3-2 in regulation.  Today they are scheduled to practice at 12 noon as they get ready to face the Hawks on Sunday.

Note II:  The Moose will face a massive test tonight when they welcome the top team in their division and the AHL to town.  Milwaukee (Nashville’s farm club) has been rolling all season long and while it is looking bleak for Manitoba right now they could really use a W against the Admirals.  Puck drop at 6 pm.

Note III:  Tune in for three hours of Winnipeg Jets and NHL talk on the Illegal Curve Hockey Show on TSN 1290 Winnipeg starting at 9 AM.

Winnipeg Sun:  Jets fall short against Sharks.  It wasn’t pretty and Scott has your game summary.

Winnipeg Sun:  Maurice has married old with new as a head coach, Wheeler says.  Pretty clear the Jets captain is still prepared to run through a wall for his coach. 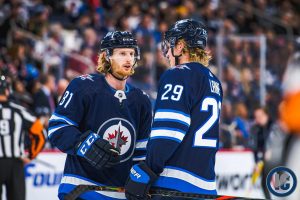 San Jose Mercury News:  Third period comeback fuels Sharks’ win over Winnipeg Jets.  Get insight into the game from a writer that covers the Jets opposition.

The Athletic Winnipeg: How to deal with trade rumours: Brenden Dillon, the Sharks’ coveted D-man, shows the Jets what he can do. (Paywall).  Not sure if Nikolaj Ehlers would be particularly happy after Dillon blew him up with a massive hit.  Jokes aside Ken looks at the defensive defenceman who is set to become a UFA at the end of this season.

TSN: ‘On Valentine’s Day, it was a true heart breaker’ for the Jets. Kevin Sawyer explains that the Jets were robbed by the post on numerous occasions in their loss to the Sharks, and those missed opportunities proved costly for Winnipeg.