A look at the game 59 projected lineups and pre-game audio. 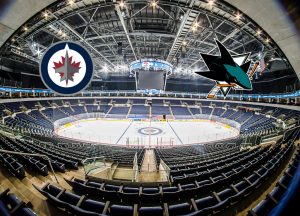 The Jets woke up this morning eight points back of the Dallas Stars for third place in the Central Division and one point back of the Arizona Coyotes for the last Wildcard spot in the Western Conference. Nashville defeated the New York Islanders last night 5-0 and trail the Jets by just two points (with two games in hand). The good news for Winnipeg is they’ve gone 2-0-1 during this six game homestand and they will face a San Jose Sharks team that has struggled this season.

The big question mark for the Jets is the status of Captain Blake Wheeler who was under the weather and didn’t skate with the team at practice on Thursday. Coach Maurice indicated they’d make a decision today.  If Wheeler isn’t good to go then look for Andrei Chibisov to make his NHL debut.  We will update you once morning skate gets underway.

According to Scott Billeck of the Winnipeg Sun captain Blake Wheeler is on the ice.  Scott also indicated that Connor Hellebuyck wasn’t skating this morning so you can expect him to start in net.

Anthony Bitetto and Sami Niku come out and Luca Sbisa and Tucker Poolman are in.

Coach Maurice:  Lineup update?  He doesn’t usually put two D men in at once, what was the thinking behind it? Anything specifically need to be better from last game?  Where does Tucker slide in?  Does he like what he sees from Pionk and Morrissey?  Would Poolman jump back onto the PK?  On Sami Niku coming out, what kind of conversation did that necessitate? Good to see a young player handle it that way?  Hellebuyck in net?  The last time these two teams met.

Puck drop is at 6:00 PM CST.  Be sure to head over to illegalcurve.com following the game for a recap of the action which includes post-game audio from the Jets room as well as from Coach Maurice.