Note:  The Jets had three different leads in the game last night in Columbus but ultimately gave up the lead in the 3rd period and lost 4-3 to Columbus.  We’ve got plenty of post-game reaction in the recap.  The Jets are now off for the NHL All-Star and Player Break.  They will return to action with a game against the Bruins on the 31st which will kick off three straight at home and 10 of 11 games at Bell MTS Place to begin the post player break portion of the schedule.

Note II:  The Moose practiced on Wednesday and today they will travel to Iowa as they get set for a weekend series against the Wild.  We learned yesterday the they will be without Logan Stanley for the games against Iowa due to an upper-body injury he sustained in the win last Sunday to conclude the homestand.  Update:  While the Jets haven’t announced it the AHL transaction page shows Kristian Vesalainen, Nelson Nogier and Cam Schilling having been reassigned to the Moose.

Winnipeg Sun:  Jets hope to use break to figure out what type of team they want to be down the stretch.  I suspect the number one priority would be healing because this team has quite a few players dealing with some things who can use the time to reset and recover.

Winnipeg Sun:  Jets have stronger showing against Blue Jackets but same result — a fourth straight loss.  Close only counts in horseshoes and those two points could have been quite a nice way for this reeling Jets team to head into the break.  Ted recaps the action from Columbus.

Winnipeg Sun:  Jets free fall could cost Maurice, whether he deserves it or not.  A measured column from Scott on the current situation here in ‘Peg city. 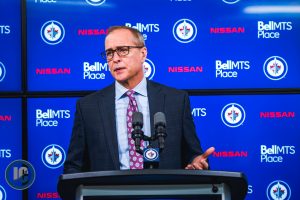 Winnipeg Free Press:  Jets stay in the fight but fall to Blue Jackets 4-3.  (Paywall).  Mike details the loss from his spot inside Nationwide Arena.

Winnipeg Free Press:  Backstopping is in Brossoit’s blood.  (Paywall).  While it was a tough moms trip they did share some good stories about their kids and Tonia Brossoit told a number of good ones.

Sportsnet:  31 Thoughts.  Thought 9 has to do with the Jets and their need for the upcoming break.

Sportsnet:  3 key issues the Jets must address to remain in the playoff hunt.  The panic button has been banged quite a bit this season.  Here are the three areas suggested: 1)  Address the very expected blue-line issues. 2) Dip into free-agent rental market to shore up centre depth. 3) Ease Connor Hellebuyck’s workload in the cage.

The Athletic Minnesota: Jared Spurgeon confirms apologetic Kevin Sawyer’s account of 16th birthday incident.  (Paywall).  Russo covers the Wild and spoke to Spurgeon to get his side of events.

The Athletic Winnipeg: While the will remains, time is running out for the Jets to find solutions to old problems.  (Paywall).  I was thinking “how many Fs per 60 is that” and sure enough Murat drops that in his article.  Fans are gonna be on a wild ride to the finish.

TSN: Winnipeg’s woes. The Jets are on a downward spiral having lost five of their last six games and look to turn things around tonight against the Blue Jackets. SportsCentre goes By the Numbers to take a closer look at Winnipeg’s recent woes.

TSN:  What’s wrong with Connor Hellebuyck?  After an impeccable start to the season, Jets’ goaltender Connor Hellebuyck’s game is starting to erode. Jamie McLennan joins Rod Smith to discuss the reason for Hellebuyck’s decline and suggest that the two-time all-star slow his game down and let the puck come to him. Hellebuyck would also benefit from a little more help in front of him from a depleted defensive core.

Winnipeg Sun:  Time with Moose best way to achieve NHL dream, says Gustafsson.  I had a chat with the Jets 2018 2nd rounder on Tuesday and you can just tell how excited he is at the opportunity to play here in Winnipeg.  Scott caught up with him yesterday after Moose practice.