Note:  Following their four-game road trip which saw the Jets go 2-1-1 they cancelled Friday’s practice to get some rest as they get set for three straight games at home.  Today they are scheduled to practice at 11 AM.  Be sure to stay tuned for the Practice Report for the latest news and audio.

Note II:  On Friday we learned that David Gustafsson would be given some time off following the World Junior Tournament before he joined the Moose.  Last night the Moose played in Grand Rapids and lost 1-0 in a tightly contested game.  Eric Comrie wasn’t happy with the one goal that was scored as it appeared he felt that he had the puck covered.  There will be a re-match tonight.

Note III:  We are back to our usual time for today’s Illegal Curve Hockey Show which kicks off at 9 am and brings you three hours of Winnipeg Jets, Manitoba Moose and NHL hockey talk on TSN 1290 Winnipeg.

Winnipeg Sun: Jets fix oil leak, bunker down for six-game sprint. Mike looks back at the road trip and ahead to what is coming next for the Jets.

Winnipeg Free Press: Jets win a lot for being a bad team. (Paywall). As Mike says it isn’t a very pretty picture when you look behind the curtain but they continue to add points to the standings bank. 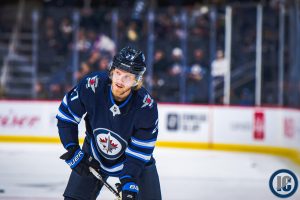