Note:  A busy practice in Toronto on Tuesday got the Jets ready for tonight’s contest against the Leafs.  The team saw a big boost with the addition of Copp on Monday and today they may get another boost in the form of Dmitry Kulikov although like Copp on Monday it will depend on how he is feeling today.  Morning skate gets underway at 10:30 am so be sure to check back for the pre-game report.  Puck drop is at 6:30 pm CST.

Note II:  The status of Jets 2018 2nd rounder David Gutsafsson remains up in the air after he suffered a minor injury in the final game of the World Junior Tournament.  He could be bound for the AHL or back to Sweden.

Note III:  It isn’t just the Jets who will be playing tonight as the Moose are in business as they kick off a three-game road trip in Rockford this evening.  The series against the IceHogs in Winnipeg a few weeks back was a bit testy so it will be interesting to see if there is any holdover from those two games to tonight.  Puck drop is at 7 pm CST.

Winnipeg Sun:  Leafs vs Jets Gameday.  Includes a big matchup of Matthews vs Laine.  His five keys to the game include: 1) Fresh memories. 2) Get back on D. 3) Sagging middle. 4) Refuelling stops. 5) Net gains? 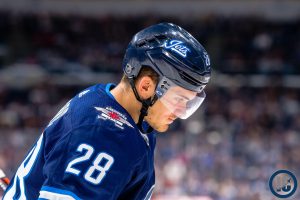 The Athletic Winnipeg:  It’s time for Sami Niku to prove himself to the Jets. (Paywall).  Now that Niku has been freed it is time for the talented defenceman to be judged for his play on the ice.  And not in one game or two but given a fair shot to demonstrate what he can do at the NHL level.

Sportsnet:  Search for November form lurks over team.  Inserting Copp, Niku and perhaps even Kulikov will go a long way to helping this squad regain that form.

NHL.com:  Byfuglien status key for Jets ahead of Trade Deadline.  It has been hanging over the heads of the Jets like a guillotine all season long.  Hard to make decisions when there remains a great unknown.