Note:  The Jets certainly got their road trip started off on the right skate last night courtesy of a 4-3 win in Florida over the Panthers to take game one of four away from Winnipeg.  Prior to puck drop Head Coach Paul Maurice provided a health update (of sorts) regarding the health of Bryan Little.  Today the Jets are in Tampa Bay as they get ready to face the Lightning on Saturday afternoon. The Bolts beat down the New York Rangers last night 9-3.  The Jets will practice at 1 pm CST so be sure to check back for the Practice Report.

Note II:  The Moose will look to get back to a .500 record when they face division rival San Antonio tonight in downtown Winnipeg.  Manitoba has gone on quite the run (winners of four straight, six of last seven games) which coincides with the strong play of Mikhail Berdin in net.  The Rampage sit two points ahead of the Moose (although they’v played one less game).  Puck drop is at 7 pm.

The Athletic Winnipeg:  Jets receive their positional report cards for the first quarter of the season.  (Paywall).  Ken puts on his professor spectacles so he can hand out some grades to the team including a look at the goalies, forwards, defence and management.

Winnipeg Sun:  Laine, Scheifele star as Jets edge Panthers.  Lots of good things happening as the chemistry continues to develop between 55 and 29.  It was a memorable game for Laine who scored his 200th point in the NHL (as well as points 201 & 202). 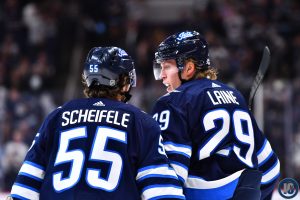 Winnipeg Sun:  Niku racks up points with Moose.  Scott takes a look at what is happening down on the farm.

Winnipeg Free Press:  Scheifele, Laine lead Jets past Panthers in 4-3 win.  (Paywall).  The duo put up six points between them as they led the Jets to a big win.  Jason recaps the action.

Winnipeg Free Press:  Jets content to let young defenceman mature in minors.  (Paywall).  The #FreeNiku movement is not going to be happy with the Jets bench boss after his comments in Florida in advance of the game against the Panthers.

Sun Sentinel:  Jets get late flourish, sink Bobrovsky, Panthers.  Read about the game from the perspective of a writer that covers the Jets opposition.

TSN:  Gritty effort pays off for Jets in win.  The Jets dug deep in a hard fought battle with the Panthers to come out victorious. Craig Button explains how a gritty effort by Mark Scheifele resonated through Winnipeg.