Note:  The Jets practiced in Winnipeg on Wednesday before they took off for Florida where they will face the Panthers tonight to kick off four games on the road.  No AM skate on the schedule but there will be a media availability at 3:30 pm CST.  Stay tuned for the pre-game report later this morning which will set up tonight’s contest.  Puck drop is at 6 pm CST.

Note II:  The Moose continued to ride Mikhail Berdin’s hot hand to victory which last night saw them defeat the Stars 2-1.  They are scheduled to practice at Bell MTS Place today as they get set for a pair of games this weekend against the Rampage.

Winnipeg Sun:  Defenceman Luca Sbisa finds his peaceful place with Jets.  It is always interesting to see what players do to try and keep their careers alive. 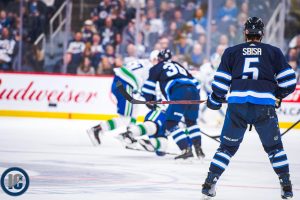 Winnipeg Free Press:  Spacek to join Jets for road trip.  (Paywall).  He’s been a consistent player for the Moose and perhaps the Jets are offering this as a bit of a carrot to their 2015 4th rounder who is in the final year of his ELC as they give him a taste of the NHL life.