Note:  If I hadn’t watched last night’s game I’m not sure I’d believe that the Jets would give up 53 shots in a game and still come out with a 3-2 win over the Sharks.  But that’s exactly what happened thanks to a stellar Connor Hellebuyck who set a personal record with 51 saves including 28 in the 2nd period alone.  He will get a rest tonight as Laurent Brossoit gets the start but Hellebuyck’s teammates will not as they will place the Golden Knights in Vegas to conclude this three-game road trip.  The team will get Adam Lowry back as he returns from a two-game suspension and could also have Patrik Laine back in the fold.  No morning skate but check out the pre-game report.  Puck drop is at 9 pm CDT.

Note II:  The Moose will have a boost today as they get Sami Niku back into the lineup after he has missed a number of games.  The team will also have 2019 1st rounder Ville Heinola who the Jets sent down to play big minutes.  The Moose have stumbled out of the gate this season going 1-7-0-0 including losing six straight.  Today they have a chance to turn things around against the Griffins starting at 2 pm.

Note III:  We kick off your day however with the Illegal Curve Hockey Show on TSN 1290 Winnipeg starting at 9 am.  Three hours of Winnipeg Jets, Manitoba Moose and NHL hockey talk.

Winnipeg Sun: Jets, Hellebuyck, steal one in San Jose.  As per usual Paul along with his dry sense of humour recaps the action and adds some of his usual zingers to the game report.

Winnipeg Sun: Jets need to look out for No. 1, not No. 33.  Firstly nice headline.  Secondly Scott writes about the situation with Dustin Byfuglien and some options on how this saga may play out.

Winnipeg Free Press:  Hellebuyck backstops Jets to 3-2 win over Sharks.  (Paywall).  That title feels like an undersell of the thievery the Jets netminder pulled off last night.  Mike recaps the game from his spot inside SAP Center.

Winnipeg Free Press:  Time for Scheifele, stars to shine.  (Paywall).  Now Mike wrote this before 55 set up 26 for the go ahead goal in the 2nd period of last night’s game.  But the point remains that if this Jets team is gonna do anything the top players are gonna be the ones doing the majority of the heavy lifting. 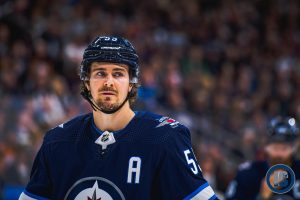 Winnipeg Free Press:  Jets give up more than they get inside the faceoff circle.  (Paywall).  Who knew so much could be gleaned from a faceoff.  I kid of course but an interesting article about the local squad at both ends of the rink.

Winnipeg Free Press:  Slow, long route to the big league.  (Paywall).  Suess is another one of those home grown prospects that is getting a chance to taste pro hockey at the highest level and while it is likely he is heading back to the Moose today this could be an important stepping stone for the Minnesota kid.

San Jose Mercury News:  Sharks dominate Jets in shots, still lose 3-2.  Always insightful to read about the game from someone who covers the Jets opposition.

Sportsnet: Why the Winnipeg Jets should consider splitting up Scheifele-Wheeler duo.  Sean writes about a topic that has held quite a bit of curiosity for those who watch this team.

The Athletic:   Coaches who could soon be free agents.  (Paywall).  As revealed by Elliotte Friedman on Saturday the Jets bench boss is in the final year of his deal.  LeBrun includes Paul Maurice in his list and talks about the expectations on a coach in his fifth year with a club and whether they are fair in this situation.