Note:  It was a less than ideal stop back home for the Jets who went 1-4-0 during the five games they played in Winnipeg including last night’s 3-2 regulation loss to the Kings which leaves them 5-6-0 on the season.  They have a few days of practice scheduled including today at 12 noon before they depart for Regina to take on the Flames in the Heritage Classic on Saturday.  Be sure to check back for the Practice Report to get fully up-to-date with the latest Jets news and audio.

Note III:  The Moose also have hit a bit of a skid sitting 1-5-0 on the season after being swept the last four games at home.  Today is their final day of practice as they get set to take off for a two-game road trip to Grand Rapids and Chicago this weekend.

NHL.com:  Jets center pumped to play against Flames in his first organized outdoor game.  Bryan Little is keeping a diary ahead of the Heritage Classic so if you’d like to read his thoughts in advance of Saturday’s game check it out.

Winnipeg Sun:  Jets give up 41 shots in loss to Kings.  You knew it was gonna be one of those nights when the shot total early in the opening period was already disproportionate and ended 21-5 after 2o minutes.  The fact that it was a tie game is a testament to the Jets goalie.  Scott provides his thoughts on the game. 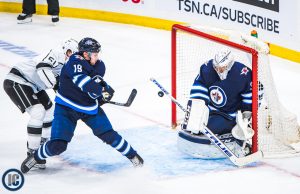 Winnipeg Free Press:  Jets fall below .500 with 3-2 loss to visiting Kings.  (Paywall).  Connor Hellebuyck was ready to go right from puck drop last night.  Unfortunately for him the rest of his team was not. Mike recaps the action.

CBC:  Anze Kopitar’s late goal lifts Kings over Jets.  You could tell that giving up that third goal to the Kings really got to the Jets netminder post game as he seemed absolutely shocked it beat him.

Sportsnet: How five former Winnipeg Jets are doing on new teams in 2019-20. If you’d like to catch up with these five here ya go.