Note:  The Jets hit the ice last night in Edmonton, losing to the Oilers 2-0 to kick off the pre-season schedule.

Note II:  Today’s schedule calls for Group 1 to be on the ice at 9 am while Group 2 will the hit the ice at Noon.  Here is a look at the updated Group 1 and 2 rosters.  We will have updates on site.

Winnipeg Free Press:  Jets grounded in pre-season opener.  (Paywall).  Mike McIntyre was in Edmonton and offers up these thoughts on last night’s contest.

Winnipeg Sun:  Poolman, Luoto shine as Jets drop preseason opener to Oilers.  Despite the loss Scott wrote about the players who stood out in a positive manner.

Winnipeg Sun:  Perreault just wants a role.  (Paywall).  Perreault is a utility player who can still positively impact his squad and much like the younger players, will fight for more minutes on this Winnipeg team this season. 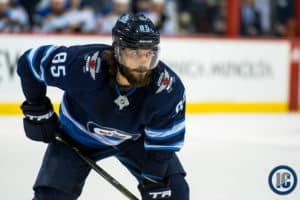 NHL.com: Laine made ‘easy choice’ to train with SC Bern while not signed with Jets.  While the Jets coaching staff would prefer to have him in Winnipeg it would appear they aren’t upset with his choice of team to practice with as he awaits word of a new contract.

Sportsnet:  Jets motivated by chance to prove critics wrong.  We were talking about this as the Jets mantra for this upcoming season on the Illegal Curve Hockey Show back in July and it would appear others believe that will be the case with the Jets this season.

The Athletic Winnipeg:  What really happened at Andrew Copp’s arbitration hearing — and what comes next for him in Winnipeg.  (Paywall).  Murat goes into great detail on the process and Copp really opens up in this one.

In the 45th episode of Ground Control, Jamie, Mitch and Tyler chat about the early days of training camp, Josh Morrissey’s contract extension and much more. Joining Jamie as this week’s guest is defenceman, Josh Morrissey, to discuss his new deal with Winnipeg, the importance of being financially responsible, fantasy football and much more!