Note:  Some hockey finally as pre-season for the Jets gets underway today with a game against the Oilers in Edmonton.  The game group hits the ice at 10 am before they head west and the non-playing group will practice at 12 noon.

Note II:  Check out what’s happening for the Jets in the first pre-season game against the Oilers.

NHL.com: Laine made ‘easy choice’ to train with SC Bern while not signed with Jets.  While the Jets coaching staff would prefer to have him in Winnipeg it would appear they aren’t upset with his choice of team to practice with as he awaits word of a new contract.

Sportsnet:  Jets motivated by chance to prove critics wrong.  We were talking about this as the Jets mantra for this upcoming season on the Illegal Curve Hockey Show back in July and it would appear others believe that will be the case with the Jets this season.

The Athletic Winnipeg:  What really happened at Andrew Copp’s arbitration hearing — and what comes next for him in Winnipeg.  (Paywall).  Murat goes into great detail on the process and Copp really opens up in this one.

Winnipeg Sun:  Comrie looking for tranquillity ahead of preseason start.  He puts a tremendous amount of pressure on himself so it will be interesting to watch him continue to push from within this season.

Winnipeg Free Press:  Roslovic ready to fight for ice time.  (Paywall).  He is ready to take that next step in his progression. 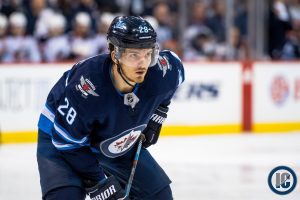 Winnipeg Free Press:  Goaltender working hard to move up pecking order.  (Paywall).  Comrie continues to make a case in the AHL for a chance in the NHL.

Winnipeg Free Press:  With Laine and Connor holding out, depth forwards audition for top spots.  (Paywall).  For guys on the bubble this is quite a chance.

The Athletic Winnipeg:  Jets forward Jack Roslovic needs to seize opportunity.  Ken offers his thoughts on the Jets other 2015 1st round selection.

Sportsnet:  Younger Jets keen to show of skills with Laine, Connor not at camp.  Sportsnet’s Sean Reynolds spoke with members of the Winnipeg Jets to get their take on Patrik Laine and Kyle Connor not being at the start of training camp.