Note:  Jets Training Camp continues today and will follow the same schedule they had on Saturday with group 1 skating at 9 am and group 2 skating at 12 noon.  Worth noting ahead of today’s skates there were some changes to the groupings.

Winnipeg Sun:  RFA Laine set to train with Swiss club as Jets’ impasse drags on.  And his coach here in Winnipeg, while obviously preferring to have the Finn with his team, didn’t seem too upset about this latest development.

Winnipeg Sun:  Stanley defying the doubts he’s faced for years.  I’ve been asked about this topic a number of times and it really is a question of expectations.  Do I think Logan Stanley will be a top pair D man?  I’m not sure.  But I know he can be in your top six for a long, long time.  And his learning arc that we saw between game one as a pro and when he ended the season was quite significant.  But in this instant gratification society we live in the tendency for D men to take awhile to develop may not be too convenient. 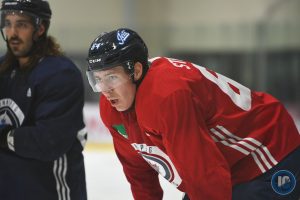 Winnipeg Free Press: New lines, defence pairs debut as Jets training camp underway.  (Paywall).  It is only a few days in and here we are already talking lines and D pairs. Season is underway.

Sportsnet:  Bryan Little hungry for bounce-back campaign.  The veteran centre has had quite a bit of responsibility thrust on his shoulders the past few seasons.

CBC: Jets fans get to see team back in action at annual Fan Fest.  It was quite the party out at the IcePlex held for fans of the two pro teams here in Winnipeg.

Sportsnet: Ehlers, Jets can’t move forward sitting around missing Connor and Laine. Nikolaj Ehlers comments on not having Kyle Connor and Patrik Laine in the lineup and what it means for the Winnipeg Jets.