Note:  The Jets prospects wrapped up the Rookie Showcase last night in Belleville with a 2-1 OT loss against the Senators prospects.  This means they finished the weekend off with a 1-1-1 record.  A number of these players will return to Winnipeg to get ready for training camp which will get underway at the end of this week.

Note II:  With Jets training camp approaching the team released their schedule and roster today.  Everything starts on Friday.

Sportsnet:  Jets ‘not worried yet’ about Laine, Connor deals but season closing in.  It’s not time to hit any panic buttons but with news around the league that some of the smaller fish RFAs are getting deals done how much longer before one of the big fish get snagged?

Sportsnet:  31 Thoughts.  Plenty of RFA talk in the preamble.  Additionally there were Jets points in 3 (Laine), 17 (Ehlers) and 18 (Jets being disregarded).

The Athletic Winnipeg:  How Nik Ehlers reviewed his game, received trade rumours and got ready for this Jets season.  (Paywall).  Ken Wiebe caught up with the Dynamic Dane to discuss his (Ehlers not Ken’s) summer and how he (again Ehlers not Ken) used the time to focus on improving his game.

Winnipeg Free Press:  Perreault happy to stick around.  (Paywall).  A forward who can still be quite effective.  It will be interesting to see how he is used this season. 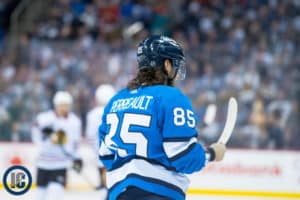 Winnipeg Sun: Jets Chevy not sweating Laine, Connor deals — yet.  Paul chatted with the Jets GM in Belleville one-on-one for 11 minutes on a number of topics.

Sportsnet:  Three biggest questions facing the Winnipeg Jets entering training camp.  To the surprise of nobody those questions are: 1) Will both Laine and Connor eventually return to the fold? 2) How will the team compensate for the loss of Jacob Trouba and Tyler Myers? 3) Can Connor Hellebuyck rebound?

The Athletic: Josh Morrissey’s increasingly crucial role with Jets next step on his climb toward the top. (Paywall). I’ve been on this train since the beginning as I saw a kid who both on and off the ice was exactly the type of player this organization would want from the start of his career to the end.

TSN 1290 Winnipeg: I took (arbitration) as going to war. Winnipeg Jets forward Andrew Copp joined Andrew Paterson and Rick Ralph on the Afternoon Ride. They discussed his summer, the arbitration process, and the upcoming season.