Note:  With September right around the corner we have put out a list of important dates for the Winnipeg Jets, Manitoba Moose and the newest kid on the block Winnipeg Ice for next month.

Note II: The four-week August hiatus is over for The Illegal Curve Hockey Show as the show returns tomorrow with Ezzy and Drew for two hours starting at 9 am CT. Guests already confirmed for tomorrow: Scott Billeck (Winnipeg Sun) and the recently retired Mike McKenna (new Vegas Golden Knights Analyst).

The Athletic Winnipeg: Winnipeg isn’t exactly rebuilding but growing pains are on the way. (Paywall). Not exactly a confidence inducing headline as Murat delivers his state of the franchise article.  You can also listen to Murat below as he joined the guys on The Afternoon Ride. 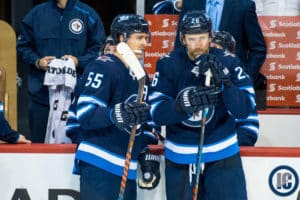 Murat Ates of The Athletic joined Andrew Paterson and Rick Ralph on the Afternoon Ride yesterday. They discussed the latest on RFAs Kyle Connor and Patrik Laine, how Laine can return to being a 40 goal scorer, the possibility of Blake Wheeler moving to centre and the uncertainty surrounding the Jets heading into training camp.

Winnipeg Free Press: Winnipeg was best move for German left-winger. (Paywall). Plenty of interesting storylines at Ice training camp including this one about the Berlin born forward. Mike also writes about forward Connor McClennon as well as the head-to-head competition between 2019 No. 1 bantam pick Matt Savoie and No. 2 choice Conor Geekie.

Winnipeg Free Press: Winnipeg Ice captain ‘punching forward’ in return from Achilles injury. (Paywall). It has to be so frustrating for the Vegas Golden Knights draft pick but he certainly seems to have a good grasp of the journey back to full health.