Note: The Jets second buyout window opened on Friday with a 48 hour window. As per Cap Friendly “any player bought out must have a cap hit of at least $3,455,438 and was on the clubs reserve list at the trade deadline”. Stay tuned to see if the Jets exercise this option.

Note II:  Yesterday we took a look at some concept art for the Winnipeg Jets Heritage Classic uniform.  Check it out here.

Note III:  Today is our final Illegal Curve Hockey Show of the season before we take our August hiatus (although don’t worry because this site will still be updated whenever there is Jets or Moose news) and we want to hear from you.  We will be mostly talking about the Winnipeg Jets throughout the two hour show which will also feature your phone calls (204-780-1290).  The show starts at 9 am and will run for two hours.  Listen here.

NHL.com:  Mark Scheifele believes Jets are tight-knit team.  The Jets top centre continues to have faith in his team as he spoke from Toronto where he participated in former NHL player Dominic Moore’s Smashfest ping-pong tournament.  Article includes a Q&A on players who have left, how you replace them, Laine/Connor unsigned, Jets being eliminated by eventual conference winners each of the past two seasons and whether the Jets are under the radar. 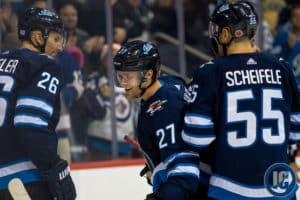 Winnipeg Free Press: Dump & Chase.  (Paywall).  Jets talk in the Overtime section where Mike and Jay chat about their projections for the Jets lines & D pairs next season.

Mark Scheifele chatted with The Hockey News’ Ryan Kennedy about the moves the Winnipeg Jets have made this summer, what he does to train in the off-season and his viral video from a few weeks back.