Note:  With RFA watch in full swing here in ‘Peg city the arbitration hearing for Andrew Copp is just two days away with Neal Pionk’s coming up shortly as well on the 24th.  A reminder that they have to file a brief no later than 48 hours in advance of the hearing date which for Copp would be today.  And the numbers are in…..

Note II:  The Jets and Moose announced that they have renewed their affiliation agreement with the Jacksonville Icemen of the ECHL.

The Athletic Winnipeg: The three versions of Andrew Copp and the role he could play in Winnipeg’s success next season. (Paywall). I suspect by design and not coincidence Murat puts out this piece on Copp the same day we hear about his salary arbitration numbers.  Plenty to digest.

Winnipeg Sun:  A little roster juggling could do the Winnipeg Jets a lot of good next season.  Scott uses WAR (to which I @ tweeted him ‘WAR, h’uh, yeah! What is it good for? Absolutely (nothin’) but in this instance that would not be accurate”) to tweak the Jets lineup for next season and he got some interesting results from this exercise. 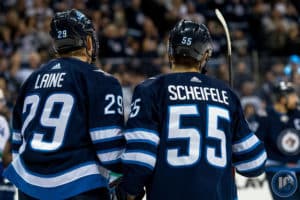 The Athletic Winnipeg: Charting Winnipeg’s path back to being a Stanley Cup contender. (Paywall). Lots of talk about the window, which just seemed to open, closing in Winnipeg from folks outside the province. Murat looks at what the Jets can do to keep that window open.

WGR Sports Radio Buffalo: Are the Sabres and Jets a match for a Ristolainen trade? I missed this one the other day.  Jeff Hamilton of the Winnipeg Free Press was on Buffalo radio on Wednesday discussing whether these two teams could get together for another trade.  The analytics on Ristolainen aren’t great and it makes my head spin when I hear Nikolaj Ehlers name being mentioned.

NHL.com: Neaton following in footsteps of Hellebuyck for Jets.  Winnipeg certainly looks like they’ve turned the goalie position into one of strength.