48 hours ahead of the arbitration hearing we get a look at what both sides are thinking. 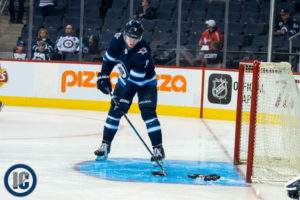 We are two days away from the arbitration date for Jets forward Andrew Copp which is scheduled for Sunday, July 21st.  The filings had to be in today prior to the hearing in 48 hours and according to Elliotte Friedman of Sportsnet it looks like this:

Last year with Jacob Trouba, as a point of reference, the Jets were seeking a one year contract worth $4.0 million and Trouba’s camp wanted one year $7.0 million.  The arbitrator split the difference and awarded him $5.5 million for the 2018-19 season.

Might we something similar here?  The folks at Evolving Wild predicted a two year deal for Copp with a projected cap hit of $2,176,861.

But if you’re thinking this could still get settled in advance of the hearing here is what Copp’s agent told Ken Wiebe of the Winnipeg Sun:

Kurt Overhardt, agent for Andrew Copp, isn’t expecting a last-minute deal: “we are going to arbitration and look forward to it.”

Although just because Overhardt said that doesn’t preclude the two sides from getting something done in advance of the hearing.

How will this shake out? What is your prediction? Let us know by joining the conversation on our instagram page.