Note:  The Jets pre-season schedule was released on Thursday.

Note II:  The Jets announced yesterday that they signed 2018 2nd round pick David Gustafsson to a three-year ELC.

Note III:  Congrats to Raptors fans across Canada as Toronto brings the NBA Championship north of the border for the very first time. It was a wild Game 6 as they take the series 4-2 with a 114-110 win in Oakland and bring a major pro title to this country for the first time since 1993.

Winnipeg Sun: With dominoes about to fall, an active off-season should soon heat up for the Jets.  Good lessons to be learned for this Jets team from what the Blues were able to accomplish.  And Ken gets into what will have GM Kevin Cheveldayoff up working late into the evenings for the next little while. 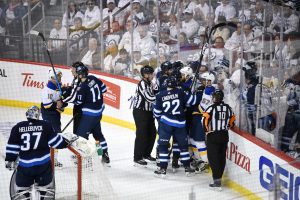 The Athletic: Where things stand with the Jets, Jacob Trouba and the trade possibilities. (Paywall).  In this article, Craig Custance got Jets GM Kevin Cheveldayoff to acknowledge that he is having conversations about a Trouba trade but which included “there are many, many conversations on the go from 31 different teams”, i.e. Chevy speak.  The usual teams mentioned as a possible trade destination.

USA Today: Which team will be the NHL’s next first-time champion? The Jets are #2 on this list.