Note II:  The Jets dropped game 2 to the Blues by a final score of 4-3 last night in downtown Winnipeg to go down 0-2 in their playoff series.  Today they were scheduled to practice at Bell MTS Place but will instead hold a media availability so be sure to check back for the Playoff Practice Report.  The team will thereafter take off for St. Louis ahead of game 3.

Note III:  The Moose had a huge game last night in Grand Rapids to start the final road trip of the regular season with a 4-1 win over the Griffins.  Unfortunately for the Moose both the teams they are competiting with for the playoffs (Iowa & Texas) won last night as well.  Today they will be in Chicago to play the second game of three in three days.  The Wolves played and lost in OT against the Wild last night.  Puck drop is at 7 pm.

Note IV:  Tune in for three hours of Winnipeg Jets and NHL hockey talk on the Illegal Curve Hockey Show on TSN 1290 Winnipeg starting at 9 am.

Winnipeg Sun:  Jets in big trouble, go down 2-0 to Blues. 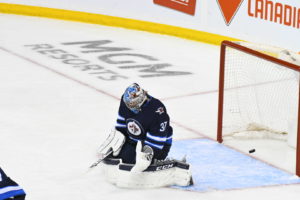 Winnipeg Free Press:  Diminutive Jets forward a giant in the eyes of his teammates.  (Paywall).

Sportsnet:  Jets’ goaltending fails them just as offence shows up to play.

TSN: Hellebuyck getting out played by Binnington through two.

TSN:  Hellebuyck fails to make the timely save in game two.