Note II:  The Jets were in Chicago last night which saw them kick off the final regular season road trip with a 4-3 OT win against the Hawks.  Today they are in Minnesota to take on a Wild team that is barely on playoff life support (sitting five points back of the Avalanche with three games to go) for the last wild card spot.  No morning skate for Winnipeg with the only expected change being Eric Comrie in net but be sure to check back for the pre-game report which will be updated when the lineup gets finalized.

Note IV:  The Moose are set to kick off the final homestand of the regular season when they welcome the very tough Bakersfield Condors to town tonight in the first of a back-to-back against the Oilers farm club who are the second hottest team in the AHL.  Morning skate gets underway at Bell MTS Place at 10:30 and puck drop is at 7 pm.

Winnipeg Free Press:  Roslovic scores twice to power Jets past Blackhawks 4-3 in OT.  (Paywall).  Mike with a recap of all of the action from his spot inside the United Center. 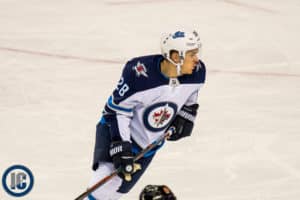 Winnipeg Free Press:  Blackhawks captain praises Jets, sets new career high in points.  (Paywall).  I listened to an interview with Toews during the 1st intermission of the Hawks broadcast after he tied his career high in goals (which he had set 10 years earlier) and set a new career high for points but still he still talks about how he saw room for improvement in his game and you see what it takes to truly have the mentality of a champion.

Winnipeg Free Press:  Defenceman wants squad to get its game right.  (Paywall).  Unfortunately for the Jets they won’t be getting #44 back before the playoffs begin but they will still need to use the next three games to work on some problem areas.

Chicago Tribune: Despite 4-3 overtime loss Blackhawks put off elimination from postseason with late goal. Read about the game from the perspective of a writer that covers the Jets opposition.

The Athletic Winnipeg:  There’s nobody like Dustin Byfuglien in the NHL, but is he enough to restore Winnipeg’s playoff swagger?  (Paywall).  No question big number 33 is a difference maker but Murat looks at the question as to whether his presence can sufficiently help the Jets get their groove back.

Global News: Winnipeg man to give homeless person a makeover, Jets playoff tickets. Really nice gesture from one Winnipegger to another.

TSN: Jets need top offensive players to get going before playoffs begin.  TSN Hockey analyst Mike Johnson discusses how big of a concern it is right now that the Jets’ offensive leaders have been struggling and how having an engaged Dustin Byfulgien is a good sign for Winnipeg.

TSN: Who are the Jets’ best and worst playoff matchups?  TSN Hockey analyst Mike Johnson looks at potential playoff opponents for the Jets, explaining that for him they should be wary of the Blues.

TSN: Despite concerns, Johnson sticking with his Jets pre-season prediction. TSN Hockey analyst Mike Johnson predicted the Jets would win the West and advance to the Stanley Cup Finals. Does he still feel good about that prediction with the season winding down?