Note II:  The Jets faced the Islanders last night and lost in heartbreaking fashion giving up two goals in 33 seconds to lose with 1:13 left in the 3rd period.  They will have to regroup as they will face a desperate Habs team here tomorrow night who are fighting for their playoff lives.  Today the Jets have a practice scheduled for 12 noon at Bell MTS Place so be sure to check back for the Practice Report.

Note III:  The Moose didn’t have any time to lick their wounds following a tough 3-2 loss to Texas on Wednesday night as they will complete this five-game road trip in Texas with a pair of games against the Rampage starting tonight in San Antonio.  The Rampage are sitting last in the Central but despite being 4-2 against them this season both Moose losses came in Texas.  They cannot afford any letdown tonight with points critical. 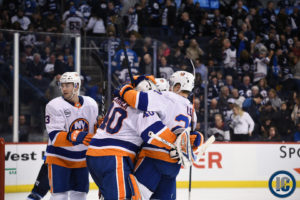 Winnipeg Free Press: Third-period collapse gets Jets a 5-4 loss to Islanders. (Paywall).  Mike brings you back into Bell MTS Place in his recap of the action.

Newsday: Two late goals give Islanders win over Winnipeg.  Always good to get a game perspective from someone who covers the Jets opposition and Andrew is one of our favourites.

New York Post: Islanders score two goals in final minutes to storm past Jets.  Another recap of the contest from someone  who covers the Islanders.

NBC Sports:  Healthier defense would make Byfuglien-sized difference for Jets.  No doubt that it will make a world of difference getting 33 as well as 44 back in the lineup.

TSN: Button on Jets: ‘Unbelievable how they just capsized’ against Isles. The Jets blew a pair of two-goal leads in their loss to the Islanders, opening the door for the Predators to still take first place in the Central. Craig Button says Winnipeg coughed up an important game because the Blues would be an incredibly tough first round playoff opponent.