Note:  The Jets were off on Monday as they rested up ahead of a three-game homestand which begins today against the Sharks who shutout the Wild last night in Minnesota.  Morning skate for Winnipeg gets underway at 10:30 AM so be sure to check back to see our pre-game report with the latest news and audio.

Note II:  The Moose had Monday off after a weekend sweep of division rival Rockford at Bell MTS Place to kick off six games at home.  Today they are scheduled to hit the ice at 10:30 AM out at the IcePlex as they ready themselves for a massive two-game series against division rival Texas who currently hold down the fourth and final playoff spot in the Central.

Winnipeg Sun: Does first place really matter? Jets in a battle, but it’s secondary.  Considering it could help you avoid Nashville or St. Louis you’d be inclined to say yes.

Winnipeg Sun:  Solid defensive play needs to continue against Sharks.  Ken provides you wit his big matchup and five keys to the game.

Winnipeg Sun:  Finnish report says Jets top prospect heading to AHL.  For now the Jets are keeping it quiet but the Finnish forward would be a good asset to help the Moose as they continue their push for a playoff spot.

Sportsnet:  Wheeler contract a sound investment for Winnipeg Jets.  The Jets captain getting it done. 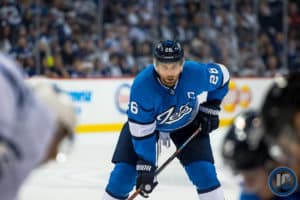