Note:  It looked like it would be a good night in Winnipeg, despite the news earlier in the day that Josh Morrissey would be out of the lineup until April, as the home team held a 2-1 lead with just a few minutes to go in the 3rd period.  But a power play goal followed 26 seconds later by a 5 on 5 goal with 1:01 left in the final period stunned the home side and left them on the wrong side of a 3-2 contest.  The Jets had today scheduled as an off day and they will be back on the ice tomorrow to practice for their huge clash with division rival Nashville in a battle for 1st place in the Central Division on Friday night.

Note II:  But you will not be without hockey as the Manitoba Moose, buoyed by the return of Mason Appleton and Tucker Poolman, will look to end their three game losing streak on this six-game road trip in game four which gets underway at 10 am CT in Toronto against the Marlies.  This game will be televised on TSN 2 and you can listen to it on TSN 1290 Winnipeg.

Winnipeg Sun:  Jets have issues, and third periods are near the top.  In addition to the third period issues Paul writes about the chemistry issues, Myers/Kulikov play, first impressions of Nathan Beaulieu, the Hendricks factor, hanging on till April and Maurice’s words.

Winnipeg Free Press:  Former captains raised to rafters.  (Paywall).  Jets did a good job honouring the past prior to puck drop.

Winnipeg Free Press:  Long in the tooth, not fleet of foot: Jets got locker-room MVP Hendricks back.  (Paywall).  While the number of games he plays down the stretch for Winnipeg won’t likely be very significant the fact is was pretty clear that this team was beyond elated to have him back in the fold. 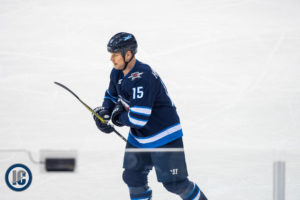 Winnipeg Free Press:  Jets’ smaller deadline deals could have significant impact.  (Paywall).  Always an interesting read from Andrew and this time he talks about the pieces the team added yesterday.

CBC: Pair of late Wild goals sink slumping Jets.  It has not been going particularly well of late for the Jets or maybe just chalk it up to the fact that they don’t look like they know how to beat the Wild this season (0/4).

Minneapolis Star Tribune:  Two late goals in 26 seconds give Wild ‘what we needed’ at Winnipeg.  Read about the game from a beat writer that covers the Jets opposition.

TSN:  ‘I know Minnesota is a hungry team, but the Jets have to be a lot hungrier’.  With just three wins in their last 11 games, and after suffering a late collapse against the Wild, TSN Hockey analyst Jamie McLennan breaks down what happened to the Jets late in the third period, and assesses how Kevin Hayes played in his first game with Winnipeg.

TSN:  The underappreciated element of Hayes’ game.  Jets fans should be excited about Kevin Hayes. Not only does he bring size and offence, he brings something you might not expect. That’s Hockey’s Mike Kelly explains.