Note:  The Jets stayed off the ice on Friday but still held a media availability which provided us with some insight into the status of Dustin Byfuglien and Nikolaj Ehlers.  The Jets have morning skate at 9:30 AM so stay tuned for the pre-game report with the latest news and audio.  Puck drop is at 6 pm.

Note II: They Moose improved to 20-19-3-2 on the season as they got revenge in OT against the Admirals in Milwaukee in the fourth game of this six-game road trip. They’ve now gone 9-3-1-2 in last 15 games since Christmas reset and Eric Comrie improved to 8-2-0-1 in his last 11 games. He’s been the unquestionable MVP for Manitoba this season with his stellar play. Jansen Harkins hot streak, despite missing the last 3 games with injury, continued with his OT goal and he is now up to four goals and four assists in his last seven games.  No rest of the Moose who will play in Chicago tonight with a 7 pm puck drop.

Note III:  Today we celebrate the 10th year of the Illegal Curve Hockey Show.  Tune in for three hours of hockey talk on TSN 1290 Winnipeg including a discussion with NHL Deputy Commissioner Bill Daly.  You can listen here.

The Athletic Winnipeg: How the subtle changes Paul Maurice wants from the Jets are akin to cleaning up spilled milk. (Paywall). Murat had a exchange with the Jets coach yesterday.

Winnipeg Sun: Jets are a buyer, but at what cost? Forward is on wish list for Cheveldayoff.  Ken takes a gander at who might be on the Jets horizon.

Winnipeg Sun: Winnipeg wants to keep rolling as Anaheim visits.  Ken’s big matchup is Lowry/Scheifele vs Getzlaf.  His five keys to the game include: 1) Keep rolling. 2) Overcoming deficits.  3) Class of 2015. 4) Pounce on wounded Ducks. 5) The Return of Perry.

Winnipeg Sun: Tanev bounces back up after yet another blocked shot.  I’ve begun to call him the bionic one because it makes no sense that he just seems impervious to the shots he is taking each and every game for Winnipeg.

Winnipeg Free Press: Jets’ 2015 draft shaping up to be a vintage year. (Paywall).  Last night the Moose won in OT and the game winner came from 2015 2nd rounder Jansen Harkins and originally they credited Michael Spacek (2015 4th rounder) with the primary assist.  Mike’s article looks at the impact the draft class is having on the Winnipeg organization.

Winnipeg Free Press:  Jets shopping Petan, fending off offers for Roslovic.  (Paywall).  As we discussed on last week’s show it is clear that the coaching staff doesn’t value the player (Petan) so it would be best for him to get a new opportunity/fresh start somewhere else. 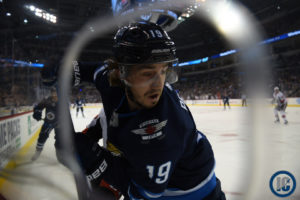 Winnipeg Free Press:  Brain freeze, deep freeze seems to be thawing.  (Paywall).  Dump & Chase are back with their weekly feature.

Winnipeg Sun:  Jets Setting.  Winnipeg Jets beat writer Ken Wiebe and Scott Billeck break down the month that was for the Jets in January, look at the play of Kyle Connor and anticipate the return of Dustin Byfuglien and Nikolaj Ehlers.