Note:  The Jets had a day off on Wednesday but will hit the ice today at 10:30 am for morning skate as they get set to take on the Columbus Blue Jackets here in Winnipeg which kicks off the first of three straight games at Bell MTS Place.  Be sure to check out the Jets pre-game report for the latest news and audio.  Puck drop is at 7 pm.

Note II:  The Moose resume their six-game road trip today which was interrupted by the AHL All-Star break.  They will practice this morning in Winnipeg before taking on the Admirals tomorrow night at UW-M Panther Arena in Milwaukee.  Manitoba will be looking for some revenge against the Admirals after they had their points streak snapped at eight games last Saturday by a score of 8-2.

The Point:  How Patrik Laine can break out of his slump.  Mike Kelly has been on The IC Hockey Show a few times and he provides his insight in this piece on how the Jets sniper can regain his form.

Winnipeg Free Press:  Ehlers is missed by under powered Jets.  Andrew suggests the Jets are missing the Dynamic Dane.

Winnipeg Free Press:  Maurice needs to get Laine going.  (Paywall).  Gotta give Jason props for managing to work a Seinfeld reference into his article.

Winnipeg Sun:  After finding legs in Boston, Jets look to put speed to use against Blue Jackets. Ted’s big matchup is Connor Hellebuyck vs. Sergei Bobrovsky. His five keys to the game include: 1) Ride the horses. 2) Keep up the speed. 3) Second-line slump. 4) Powering up. 5) Keep it fresh.

Winnipeg Sun: Laine’s performance an all-time low and Jets’ sniper needs a wakeup call.  Ted suggests it is time for the Jets to do something to get their goal scorer back to scoring goals (as well as a few other key areas that need work).

NBC Sports: Laine’s cold streak isn’t only warning sign for Jets.  Could you imagine what would be written if the Jets weren’t in 1st place in the Central?  But of course there are areas of concern for Winnipeg.

Sportsnet:  How will Patrik Laine break out of his slump?  Sean looks at the Jets rope-a-dope style of play, looks at Laine’s struggles and reflects on the 2015 bumper draft crop for Winnipeg. 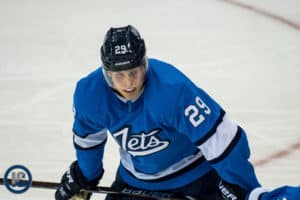 TSN 1290 Winnipeg: Laine will have to shoot his way out of his slump. Ken Wiebe of the Winnipeg Sun joined Andrew Paterson and Rick Ralph on the Afternoon Ride. They recapped the Jets win over Boston, discussed Patrik Laine’s low icetime, his current slump, how he can get back to his goal scoring ways and what the Jets may be looking for at the trade deadline.

Topics: Jets-Bruins Recap, Jets-Blue Jackets Preview, Maple Leafs acquire Jake Muzzin from the LA Kings, Is it time for the NHL to extend the length of 3 on 3 OT, Puck and player tracking technology