Note:  The Jets are on their Player break right now.

Note II:  The Moose kicked off their six-game road trip with an exciting game against the Griffins in Grand Rapids.  Despite scoring the opening goal of the game Manitoba fell 2-1 in an exciting overtime period which dropped them to 19-18-3-1 on the season. But the Moose streak continues as they are now 6-0-1-1 in their last eight games.

Sportsnet:  31 Thoughts.  Jets assistant GM Craig Heisinger is mentioned as a possible candidate for the vacant GM position in Edmonton by Friedman in his preamble.

The Athletic Winnipeg: How stars play smarter, not harder and being ‘bullish’ on Winnipeg’s Cup chances. (Paywall).  Murat and Justin Bourne share their thoughts on the Jets Cup chances, ways they can improve and how Winnipeg’s stars maximize their performance. 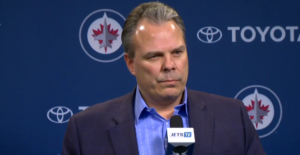 TSN 1290 Winnipeg: Eric Comrie might be the Jets best trade chip. Mike McIntyre of the Winnipeg Free Press joined Andrew Paterson and Rick Ralph on the Afternoon Ride. They discussed the Jets place in the standings at the player break, the performance of the depth lines, and possible moves the team may make at the trade deadline.

Topics: The Jets continue to be on their Player & All-Star break, Could Eric Comrie’s future be with a team outside the Winnipeg Jets organization, Edmonton Oilers fire General Manager Peter Chiarelli/Keith Gretzky is named Interim GM, Are more moves on the horizon for the Carolina Hurricanes, Craig Anderson says the NHL should do a better job of protecting goalies and should make the crease six inches smaller