Note:  The Jets wrapped up this three-game home stand going a perfect 3-0 courtesy of last night’s 4-1 win over the Golden Knights.  While the game finished off 4-1 it was a lot closer than the score might indicate and if not for the efforts of Laurent Brossoit, who is 10-0-1 as a starter, it could have easily gone south.  Instead the Jets are 30-14-2 which is good enough for 1st in the Central Division with two games in hand on Nashville who sit two points back of Winnipeg.  Today the Jets are scheduled to practice at 12 noon and then depart for Nashville to take on the Preds in a clash of the top two teams in the division on Thursday night.  Be sure to check out the Practice Report for the latest news and audio.

Note II:  The Moose look to keep this mini streak rolling as they have a modest 3-0-0-1 record after picking up an OT win in their last game on Monday.  They didn’t skate on Tuesday but are back on the ice for morning skate today at 10 AM at the IcePlex and then game four of this six-game home stand goes tonight at 7 pm at Bell MTS Place.

Note III:  Tune in following the Moose game for two hours of NHL This Week with Illegal Curve Hockey on TSN 1290 Winnipeg starting at 10 pm.

Note IV:  You may have seen a trio walking around Bell MTS Place wearing Atlanta Thrashers jerseys the last five (combined) Jets and Moose games as the McLane family were in Winnipeg making a Jets pilgrimage from Georgia.  Check out their story here.

Winnipeg Free Press:  Brossoit shines in Jets 4-1 win against Golden Knights.  (Paywall).  You could hear it in his voice last night that he is relishing this opportunity. 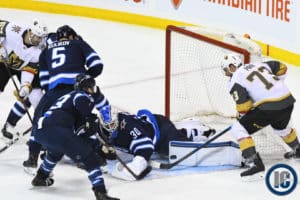 Winnipeg Free Press:  Stastny back after the breakup; ‘we’re fine,’ Jets coach says coolly.  (Paywall).   He was on the receiving end of quite a few boo birds last night.

Las Vegas Review-Journal:  Golden Knights can’t convert chances in loss to Jets.  Read about the game from someone who covers the game with insight into the Jets opposition.

Global News: Laurent Brossoit marvelous as Winnipeg Jets escape with win over Vegas. It was a memorable one for the netminder who set the new record for most saves in a period (26).

CBC: Jets subdue Golden Knights to extend unbeaten streak to 6 games.  Judy recaps all the action from her perspective inside Bell MTS Place.

The Athletic Winnipeg:  Leon Gawanke having breakout season and getting back on NHL radar.  (Paywall).  You may remember that name from when Jacob Trouba used his stick in a game to score a goal but perhaps you may want to take a read of this report on the Jets prospect.