Note:  The Jets completed the second game of this three game home stand last night with a comeback 4-3 OT win over the Ducks.  Today they are scheduled to hit the ice at Bell MTS Place as they get ready to wrap things up against Vegas on Tuesday night.  Will Tyler Myers be ready to go?  Be sure to check our the Jets Practice Report for the latest news and audio.

Note II:  Normally we’d be talking about another week of practice for the Moose getting underway but they are back in action tonight as they get set to take on the Milwaukee Admirals tonight at Bell MTS Place in game three of this six-game home stand.  They have morning skate at 10 AM out at the IcePlex and puck drop is at 7 pm.  As always be sure to follow me on twitter for game updates and post-game on here for the game recap.

Winnipeg Sun:  Little comes up big as Jets centre produces the OT winner vs Ducks.  Plenty to digest from last night’s action and Ken serves it up with his observations from the game. 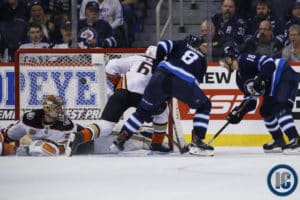 Winnipeg Free Press:  Jets rally to defeat Ducks 4-3 in OT.  (Paywall).  It was an unusual contest and Mike provides his insight from his seat in the pressbox.

Orange County Register: Ducks fall to Jets in overtime as losing streak reaches 11 consecutive.  Not only did they lose but Ducks GM Bob Murray issued a release to media indicating that coach Randy Carlyle’s job was safe.  Eric also recaps the game from the perspective of someone who covers the Jets opposition.

CBC: City asked to chip in $150,000 to bring NHL game to Regina.  Pertains to the game between the Jets and Flames next October.

TSN: Jets were able to expose ‘fragile’ Ducks.  Despite having the lead twice against the Jets, the Ducks were unable to close out the game and extended their winless streak to 11 games. TSN Hockey analyst Jamie McLennan explains what he saw from a ‘fragile’ Anaheim team and discusses how Winnipeg did what it could to get Patrik Laine back on the scoresheet.