Note:  Coming off last night’s 4-2 win over the Red Wings the Jets have moved back into 1st overall in the Central (tied with Nashville but having played two less games). The team is off today ahead of their next game on Sunday when they face a Ducks team that has fallen out of the playoff picture, sitting 9th in the Western Conference having gone 0-7-3 in their last 10 games after last night’s 7-4 loss to the Penguins.  The Jets will be back on the ice on Sunday at 9:30 am for AM skate.

Note II:  The Moose are back in action today as they have a re-match against the Rocket at Bell MTS Place tonight at 6 pm.  The team is hoping to have Tucker Poolman back in the lineup for the first time since late November when a concussion forced him out of the lineup.  I will be joining Mitch in the booth to provide colour analysis and you can hear the call of the game on Moose Hockey which starts with the pre-game show at 5:45 pm by clicking here.

Note III:  Tune in for three hours of Winnipeg Jets, Manitoba Moose and NHL hockey talk on the Illegal Curve Hockey Show on TSN 1290 Winnipeg starting at 9 am.  Listen here.

TheScore: Predators, Jets keeping an eye on Flyers’ Simmonds.  I’ve always been a big fan of Simmonds game so he might be a nice piece to add but at what cost and would that address the area of greatest need for the Jets?

Winnipeg Sun:  Brossoit shines again as Jets grind out win over Red Wings.  33 saves in the win for the Jets backup.  Ken recaps the action. 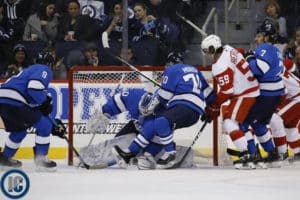 Winnipeg Sun:  No Matty-boost for Laine.  Adding 85 seems to be a help for whatever line he gets placed on.

Winnipeg Free Press:  Lesser lights on D getting big minutes.  (Paywall).  A number of others are going to have to step up when you lose big minute players.

Winnipeg Free Press:  Brossoit brilliant as he backstops Jets to 4-2 win over Wings.  (Paywall).  Looking like the best backup signing out there.

The Detroit News: Three-goal hole too much, Red Wings lose 4-2 to Jets. Read about the game from the perspective of a beat writer that covers the Jets opposition.

The Athletic Winnipeg: Insight from analytics and youth coaches on getting Patrik Laine back on track. (Paywall). Laine has been streaky as you might expect from a young player (although when you have 24 goals in a season it feels wrong to type the word streaky) this season.  He had three goals in his first 10 games, then 18 in his next 20, followed by three more in his next 13.  Murat looks at some factors to get him back on track.

TSN: Jets depth strikes in win over Wings.  Brandon Tanev opened up the scoring before two different groups cashed in for Winnipeg. Dave Poulin explains what makes the Jets’ depth so lethal, and how Josh Morrissey stepped up with injured defencemen.