Note:  The Jets took Saturday off following a pair of overtime wins on Thursday (Oilers) and Friday (Hawks) as they rested up for a big contest tonight against the red-hot Tampa Bay Lightning.  Winnipeg morning skate gets underway at 9:30 am followed by a 6 pm puck drop tonight at Bell MTS Place.  Be sure to check out the pre-game report for the latest news and audio.

Note II:  The Moose had a tough night last night as they dropped a second consecutive home game to the Toronto Marlies by a final score of 5-1.  They will have to hope that some healthy reinforcements are on the way as they are beyond short staffed right now.  As if things weren’t bad enough they lost CJ Suess on Friday and Emile Porier on Saturday.  It wasn’t all bad news however as 2930 Teddy Bears will be donated to the Christmas Cheer Board of Winnipeg after a sold out crowd tossed that many stuffed animals onto the ice during the 1st intermission.  The team has the day off today and will be back on the ice on Monday for practice.

Winnipeg Sun:  Five keys to Jets vs Lightning.  Ken’s big matchup is Mark Scheifele vs Steven Stamkos. His 5 keys to the game are: 1) Need for speed. 2) Driving the bus. 3) Powerful stuff. 4) On Point. 5) Masked men. 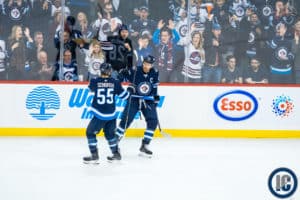 Winnipeg Sun:  Fans in for holiday treat.  Can the game live up to the hype?  We usually get pretty entertaining games between these two squads.  Ted counts the way fans can look forward to tonight’s contest.

Sportsnet: Identifying each Western Canadian NHL team’s biggest weakness.  The absence of an old friend is mentioned as part of the reason the Jets may have their particular weakness.

Topics: Jets-Blackhawks Recap, What happens when Andrew Copp returns from his injury is it Mason Appleton or Brendan Lemieux who will be sent down to the Manitoba Moose, Jets/Lightning Preview, The Jets struggles against upper echelon NHL teams.

Topics: Will this be the summer that we finally see an offer sheet extended to an RFA, The Alex Pietrangelo Match Game, The surge in goal scorers on pace for 50 or more goals this season.