Note:  The Jets won a wild one last night as Josh Morrissey’s game winner in OT delivered his side a 5-4 comeback win which improved them to 20-9-2 on the season.  The Jets are a remarkable 10-4-0 this season when giving up the first goal of the game and despite blowing a 3-1 lead just continue to show that they are never out of a game.  They left for Chicago following the game as they will play the Hawks tonight on a roll having gone 7-1-0 which includes two wins over the aforementioned Hawks during this streak.  Be sure to check out the pre-game report for insight ahead of the action with puck drop at 7:30 pm.

Note II:  The Moose kick off six straight games at home when they face the defending Calder Cup Champion Toronto Marlies tonight at Bell MTS Place.  I will be joining Daniel Fink in the broadcast booth to provide colour analysis with the pre-game show getting underway at 6:45 pm and puck drop at 7 pm.

Sportsnet:  Jets continue to win while searching for their ‘best game’.  Still evident that this team is not yet hitting their potential and when you consider where they are in the standings that is pretty significant.

Sportnet: Oilers show fight but unable to hold on against Jets.  Not a headline you would be used to reading if you remember the Smythe Division. 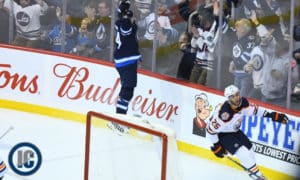 Edmonton Sun:  Shorthanded Oilers lose 5-4 overtime thriller to the Jets.  Always good to ready about the game from the perspective of someone who covers the Jets opposition.

Winnipeg Free Press:  Jo Mo the hero with OT winner as Jets overpower Oilers 5-4.  (Paywall).  Figures that a kid from Calgary was the one who stuck it to the team he likely grew up disliking.

Winnipeg Free Press:  Connor enjoying life with linemate Little.  (Paywall).  He has seamlessly joined that second line and is learning quite a bit from the veteran centre.

Winnipeg Free Press: Bad luck to be superstitious. (Paywall).  Mike and Jay have some fun with lucky number 13 of Dump & Chase.

Sports Illustrated: How Patrik Laine Developed the Best Shot in the NHL.  Alex with the long read on a shot that folks continue to marvel at here in Winnipeg and around the league.

TSN: Jets’ top players dominate Oilers in electrifying overtime victory.  Winnipeg’s top players showed up against Connor McDavid and the Oilers, with Mark Scheifele, Blake Wheeler and Patrik Laine all making a difference for the high-flying Jets. TSN Hockey analyst Jamie McLennan discusses the entertaining matchup and whether Darnell Nurse can grow into a top pairing defenceman under Ken Hitchcock.