Note:  The Jets took it on the chin last night in Calgary allowing five 1st period goals to give the Flames what looked like an insurmountable lead.  However credit Winnipeg with putting up a good fight as they poured on the pressure in the 2nd to make it a three goal game and came within a goalie interference call of making it a one goal game.  Instead they lost for the first time in regulation since November 2nd.  They are off today enjoying U.S. Thanksgiving (comfortably in a playoff spot which is usually a good omen) before hitting the ice for an afternoon game against the Wild on Black Friday.

Note II:  The Moose have another day of practice as they get ready to face the second place team in the central division in the Iowa Wild on Friday night.  They are scheduled to hit the ice at 10 am at Bell MTS Place.

Winnipeg Sun: Jets crash on takeoff despite early goal. Ken provides his insight into the events that transpired last night inside the Saddledome. 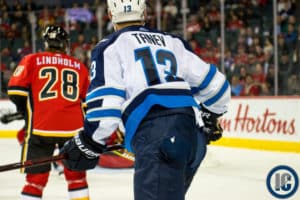 Calgary Sun: Flames turn Dome into no-fly zone, down Jets 6-3. Read about the game from the perspective of a writer that covers Calgary.

Winnipeg Free Press:  Jets captain will be home for U.S. Thanksgiving.  (Paywall).  In addition to talking about the Jets captain being in Minnesota for turkey day Mike looks at a bunch of other Jets notes for this column including: 1) If it ain’t broke, don’t fix it. 2) Back-to-back goalie schedule. 3) Brandon Tanev’s shiner. 4) Partial reunion of the CCM line.

Sportsnet: Kyle Connor emerging as an important line driver for Winnipeg. As someone who has watched him from his college days at the University of Michigan and then with the Manitoba Moose of the American Hockey League I wasn’t surprised to see his elite offensive game continue into the NHL but I can admit that I didn’t think he would take his game to this level this quickly.

The Athletic Winnipeg: Digging into Blake Wheeler and Mark Scheifele’s strong — and perhaps surprising — penalty-killing data. (Paywall). Murat looks at two players you’d think you would be reading about in a power play breakdown but he looks at how they have done when down a man.

Winnipeg Free Press: Doesn’t take long for Shaw to make Moose antlers fit. (Paywall).  Mike was at Moose practice on Wednesday and files this report on the newest member of the organization.