Note:  The Jets kicked off the four-game road trip on the right skate thanks to a 6-3 win on the back of a nine point night from the 2nd line.  This included a hat trick from Patrik Laine, four points from Kyle Connor and Bryan Little with the opening goal of the game as well as a critical assist on Laine’s second goal which gave the Jets some breathing space.  Today the Jets are in Calgary and are scheduled to practice at 3 pm.  Stay tuned for the Winnipeg Jets Practice Report to bring you up to speed with the latest news and audio.

Note II:  The Moose had a travel day on Monday after they completed a four-game road trip in Chicago on Sunday.  Today they practice at 10 am at Bell MTS Place as they prepare to face the Iowa Wild here at Bell MTS Place in a pair of games this weekend.

Winnipeg Sun:  Laine scores hat trick in Jets win over Canucks.  What a game from Laine and that Jets 2nd line who spurred the team to a big win. 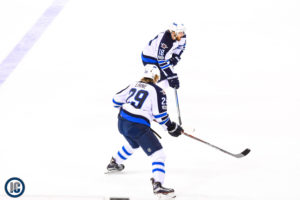 Winnipeg Free Press: Are Jets filling a need or making a power play by canceling rookie’s plans to flee to Finland? (Paywall).  Mike with his thoughts on the reasons behind the Jets recall of Kristian Vesalainen last Friday.

The Province: Cup contenders strut stuff, but pushed hard for win.  Check out a recap of the action from a writer that covers the Jets opposition.

The Province: Canucks can learn from the Jets’ flightpath to contender.  The team out west is looking at what the Jets have done here on the prairies and they are hoping that they can achieve a similar result.

TSN:  Jets’ speed overwhelms Canucks.  Hitting the road, the Jets came out fast and strong. Craig Button has more on what worked for Winnipeg in the victory.