Note:  The Jets were looking like they were on their way to a sweep of the Global Series but two bad penalties taken by Brendan Lemieux changed the momentum and a 2-1 lead became a 3-2 deficit.  The Panthers would add a fourth goal to earn themselves a split of the two games in Finland.  The Jets return home today and will have the day off (obviously) but are scheduled to practice on Sunday at 11 am out at the IcePlex.

Note II:  If you watched the 1st period of the game last night at Bell MTS Place you wouldn’t have believed that the Moose would have ended up with a win.  But rookie goalie Mikhail Berdin making his third AHL start was stellar holding his team in the game with 13 saves in the first (Moose only had three shots) which allowed them to switch things up in the 2nd period. In addition to Berdin, Griffith had four points (1G 3A), Luke Green scored his first pro goal and much more.  Check out our post-game recap which includes lines, D pairs, goal recaps, Jets prospect news and audio (Griffith, Green, Berdin & coach Vincent).

Winnipeg Sun: Parade to penalty box leads to loss to Panthers.  Where is retired referee Paul Devorski when you need him?  In addition to the Lemieux penalties like the Mark Scheifele offensive zone penalty (which resulted in a goal against) continue to hurt the Jets.

Winnipeg Sun: Jets fans travel well as many folks make the journey to Finland for Global Series.  It was very cool seeing all the Jets fans pictured throughout Hartwall Arena over the course of the two games.

Winnipeg Free Press: Laine adds scads to goals total, confidence level. (Paywall).  When you have that much talent it doesn’t take much to go from “hockey is not fun right now” to what is happening when he is contributing to the team.

Winnipeg Free Press: Rejuvenated Laine just what Jets need. (Paywall).  Perhaps it is the Finnish water but he really did look like a different player in Helsinki.  Will be interesting to see how that translates back to North America.

Winnipeg Free Press: Florida scores three with Jets down a man in second Global Series game. (Paywall).  Wasn’t how it looked like it was gonna go.  Jason recap the events from Helsinki. 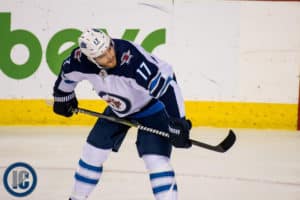 USA Today: Claude Lemieux’s son, Brendan, like his dad, could be looking at a suspension. Think it is more likely than not that he gets a phone call from the Department of Player Safety. Even if he doesn’t his coach is less than pleased with him.

TSN: Lemieux’s high stick, hit to the head change flow of the game for Jets. The Jets came out flying in the opening period against the Panthers, but in the second a couple of horrible penalties by Brendan Lemieux turned the game around. TSN Hockey analyst Dave Poulin explains.

Sportsnet: Trip to Finland a bonus for Jets’ team chemistry. Paul Maurice and Patrik Laine discuss what it was like playing a game against the Florida Panthers in Finland.

Sportsnet: Discipline for Lemieux’s hit on Trocheck. John Shannon elaborates on some of the breaking stories throughout the NHL, including what will come of Winnipeg Jets’ Brendan Lemieux hitting Florida Panthers’ Vincent Trocheck.

Illegal Curve: Moose hold on for thrilling 5-4 victory over the Wolves. Recap of the 5-4 win by the Manitoba Moose over the Chicago Wolves. Includes goal recaps, Jets prospect news and audio (Griffith, Green, Berdin & coach Vincent).

Winnipeg Free Press:  Hail Mikhail, Russian rookie goalie.  (Paywall).  As I said last night Jets and Moose fans are really going to enjoy Berdin’s personality on and off the ice.

Game 14: Panthers 4 Jets 2 (Global Series) post-game recap
Brendan Lemieux will have a hearing for his illegal check to the head Monday