Note:  While most preseason games usually don’t garner that much interest the 39 save performance by goalie Laurent Brossoit in his first start as a member of the Jets had plenty of fans excited about the expected backup to starter Connor Hellebuyck as he led Winnipeg to a 2-1 win over the Wild.

Winnipeg Free Press:  Free agent goalie turns aside 39 shots to lead Jets to victory.  (Paywall).  He certainly got folks attention with his first ever game as a member of the Jets. 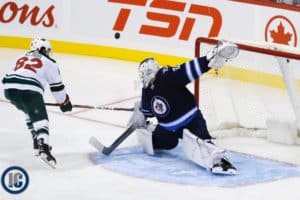 Winnipeg Free Press: Ehlers becoming crafty veteran. (Paywall).  Doesn’t seem that long ago that he was a wide-eyed rookie.

Winnipeg Free Press: Cheveldayoff not worried about future cap issues. (Paywall).  The Jets GM is clearly aware of the goal of this squad and to reach it is going to cost a few dollars.

The Athletic Winnipeg: An analysis of the Josh Morrissey contract and what to expect in 2020. (Paywall). Murat takes a look at the deal that finished off the RFA list for the Jets.

TSN: Brossoit makes impressive debut in bid for Jets’ backup goalie position. Dennis Beyak and Kevin Sawyer take a closer look at Laurent Brossoit’s debut in net for the Jets, as he aims to become Winnipeg’s backup goaltender this season.

Sportsnet:  Josh Morrissey’s deal with Jets works for both sides.  Sean Reynolds reports from Winnipeg where the Jets have signed defenceman Josh Morrissey.

TSN 1290 Winnipeg: Morrissey betting on himself. TSN’s Bob McKenzie joined the Big Show to break down the Josh Morrissey contract with the Jets, other RFAs that still need new deals as well as the ongoing situation with the Senators.