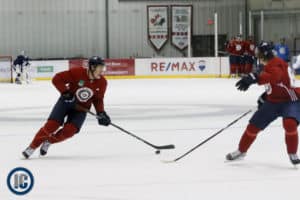 The Jets were back on the ice today after last night’s 2-1 win in the first game of the preseason as they get a few more days of training camp in and then kick off six games in eight nights starting with a contest against the Oilers in Edmonton on Thursday night.

Coach Maurice:  Status of Dustin Byfuglien.  Team faceoffs and success last night.  Did Hendricks have a lot to say last night?  On the improvement in Logan Stanley.  Thoughts on the line of Perreault with Roslovic and Vesalinen.  Puck pursuit.  On what Vesalainen can do to make an impression and stick around with the big club.  Is it fair to say they are giving Vesalainen every opportunity to make the club this season?  Thoughts on Sami Niku’s game.  On Vesalainen adjusting.  On marijuana becoming legal and the ramifications to players.