Note:  The Jets got their first RFA (with arbitration rights) signed on Thursday when the team announced they had signed number one goaltender Connor Hellebuyck to a six-year deal.  Plenty of reaction from him as well as Jets GM Kevin Cheveldayoff.

Note II:  We also learned on Thursday when the four other Jets RFAs with arbitration rights (Trouba, Lowry, Tanev and Dano) have their hearings scheduled.

Note III:   Reminder that we are back in business with the Illegal Curve Hockey Show on TSN Radio 1290 tomorrow as we switch to a two-hour show in July.  With the 2018 World Cup of Soccer ongoing we will be on a little later than normal so tune in at 11 am until 1 pm for the lots of Jets and NHL talk.

Winnipeg Free Press:  Jets reward Hellebuyck with six-year, $37-million deal.  (Paywall).  Jason Bell correctly pointed out that the value of the contract equaled the netminder’s number although when asked if this was a coincidence Hellebuyck laughed it off. 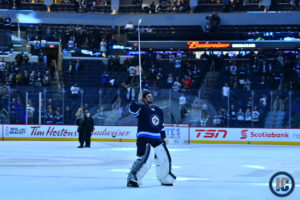 Winnipeg Sun:  Hellebuyck check mark a start in busy summer ahead for Jets’ Cheveldayoff.  The first domino finally fell yesterday as the team solidified themselves in net for the next six years but there is still plenty on the plate of Jets GM Kevin Cheveldayoff.

Sportsnet: Hellebuyck contract could be steal for Jets.  After the way we discussed the Scheifele contract the other day might Jets GM Kevin Cheveldayoff have another steal with Hellebuyck? Stay tuned to find out.

TSN: Poulin on Hellebuyck contract: ‘The numbers come right in line’. With the Jets signing restricted free agent goalie Connor Hellebuyck to a six-year, $37 million contract. Dave Poulin explains why the numbers were right for his age and the length of the deal makes sense.

TSN 1290 Winnipeg: Hellebuyck is driven to become an elite goaltender. Ken Wiebe of the Winnipeg Sun joined Andrew Paterson and Paul Edmonds on the Afternoon Ride. They discussed Connor Hellebuyck’s new $37 million contract with the Winnipeg Jets, the difficulty in projecting goalies, the Jets tandem of Hellebuyck and Broissoit, and the Jets remaining RFAs.