Note:  The Jets wake up this morning and find themselves in an unfamiliar position for the first time in these Stanley Cup Playoffs after losing consecutive games for the first time they are also down in a series thanks to a 4-2 Golden Knights win in Vegas last night.  While the game saw Mark Scheifele set an NHL record for road goals (11) the Jets will be more focused on quickly rectifying the mistakes made in game 3 as they turn their focus to game 4 tomorrow night.  The team is holding a media availability later this afternoon (4 pm CT) and the Jets Playoff Practice Report will bring you up to speed with the latest news.

Winnipeg Sun:  Golden Knights get the early lead, Fleury steals the game as Jets pour it on. 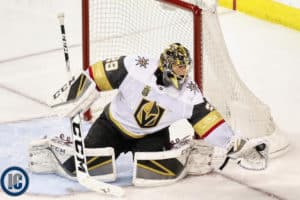 Las Vegas Sun: Golden Knights have passionate supporters outside the arena, too.

The Athletic:  Golden Knights continue to defy expectations, ramping up the pressure on Jets.  (Paywall).

CBC: What happens in Vegas? Winnipeg has a first-time experience the Jets would probably choose to forget.

NHLcom: Golden Knights continue to entertain in Game 3 against Jets.

TSN:  Scheifele vs. Fleury: Duel in the Desert puts Vegas up 2-1.

The Hockey News:  Is there any way the Winnipeg Jets can keep Paul Stastny?

TSN: Poor start, Marc-André Fleury stifle Jets. Sara Orlesky is joined by Pierre LeBrun and Frank Seravalli to discuss what happened to the Jets in the first period, the strong play of Marc-André Fleury and where is the secondary scoring from Winnipeg?

TSN: ‘Marc-André Fleury is playing the best hockey of his career’. The TSN Hockey panel discuss the impressive performance of Marc-André Fleury, how turnovers are costing the Jets and the historic night for Mark Scheifele.

TSN: ‘Fleury was lights-out brilliant’. With 33 saves on 35 shots and boasting a gaudy .943 save percentage, Marc-Andre Fleury was outstanding for the Vegas Golden Knights, backstopping them to a big Game 3 win, but as TSN Hockey Analyst Craig Button explains, the Jets did themselves no favours against a relentless Golden Knights attack.

Sportsnet: Golden Knights make off with win after ice tilted in Jets’ favour. John Shannon joined Ken Reid to break down the Golden Knights’ Game 3 win over the Jets, despite having a brutal third period and only Marc-Andre Fleury to save them from a Winnipeg onslaught.

Sportsnet: Fleury laughs at his wet willy antics after Game 3 win. Marc-Andre Fleury saved the Golden Knights’ bacon a couple times, but laughed afterward when shown footage of him sticking his finger in the ear of Blake Wheeler during a scrum.

Sportsnet:  Fleury tickles Wheeler’s ear in scrum. Looks like Marc-Andre Fleury was giving the Jets captain a “Wet Wheeler” in this scrum during Game 3.