Note:  The Jets had a day off on Wednesday but are back in action today kicking off the final regular season homestand of the 2017-18 campaign.  Tonight the Jets face a Calgary Flames team that comes limping into the city (2-8-0 in last 10) as they play out a disappointing season.  The Jets meanwhile can catch Nashville sitting three points back with both teams having two games to go.  After we saw a number of players sit in Montreal to rest up expectations are we will see most, if not all, return to the lineup.  We shall have to wait for morning skate which gets underway at 10:30 am central time if there are any changes to the lineup for Winnipeg.  The Jets pre-game report will bring you up to speed.  Stay tuned throughout the day for any and all Jets news and updates via Twitter |Facebook | Instagram.

Note II:  The Moose were also off yesterday although there was still some news for the team as Manitoba had two rookies named to the AHL All-Rookie Team in Sami Niku and Mason Appleton.  The team returns to the ice today at 10 am for a practice as they prepare Bakersfield here tomorrow night.

Winnipeg Sun: Roslovic doing what he can to force his way back in lineup.  Or perhaps they could send him down to play with the Moose as opposed to hanging around with the scribes up in the pressbox if he won’t see action based on how the Jets roster is currently constructed.  It would give the Jets a player who wouldn’t have any rust and instantly makes the Moose a Calder contender again.  Of course it would risk injury to a player who you may need during a long playoff run. 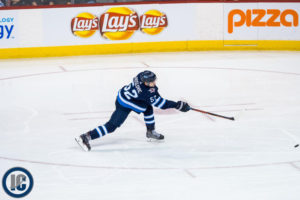 Winnipeg Sun: First place? No thanks: Jets better off without league or division crown.  I’m not so sure about that last line as I’m fairly certain I’ve seen Paul wearing the latest Burberry suit around the press box at Bell MTS Place.  As to his article there is something about this team that does suggest they do better as an underdog but with the talent they possess I’m not certain anyone will buy this team as an underdog.

Winnipeg Sun: Jets goalie Steve Mason takes another puck in mask.  Last thing this team needs is an injured goalie so it is good that the Jets backup was able to get the complete game under his belt.

Winnipeg Free Press:  Jets return after rollicking roller-coaster road trip.  (Paywall). Jason looks back with this one on the last four Winnipeg games on the road and what it has done for this squad.

CBC: Resellers already listing Jets playoff tickets for as much as $800 US.  That’s insane.  Hard to believe that people would pay that for a 1st round playoff game.

Sportsnet:  More Jets prospects will push for NHL spots in 2018-19.  Lots of good prospects in the pipeline.

TSN 1290 Winnipeg:  Jets are an extremely well-constructed hockey team.  TSN Hockey analyst Dave Poulin joins Andrew Paterson and the Rick Ralph on the Afternoon Ride. They discuss the Jets lineup changes in last night’s game vs. Montreal, why Dave isn’t surprised by the Jets success, how the Jets have been properly constructed and what the Jets need to do to succeed in the playoffs.

Illegal Curve: Prospects Sami Niku and Mason Appleton named to the AHL All-Rookie Team.  Two rookies showing that being a late pick in a draft isn’t the end of the world.