Note:  The Jets returned to Winnipeg last night with another W in the win column as they defeated the Habs in Montreal 5-4 in OT thanks to Kyle Connor’s 30th goal of the season (and third OT winner of the year).  These Jets are hotter than Hansel (Zoolander reference for those scratching their heads) with three straight wins and going 9-1-0 in their last 10.  They hit 50 wins on the season which is the first time that has ever been achieved by an NHL franchise connected to this city.  There are still two games to go the first of which kicks off on Thursday when the Flames come to town.  Today however the team will be off.

Note II:  The Moose also have the day off today as they spend this week practicing for their push towards clinching their first post-season spot since moving back to Winnipeg.  This time off could prove valuable as the Moose are dealing with a number of injured players so we may see a healthier Moose squads than we have seen in some time.  They play Friday night and Sunday afternoon against the Bakersfield Condors which ends the home portion of their regular season.

CBC: Jets playoff tickets among the hottest in the league.  Not really much of a surprise considering this is only the second playoff appearance since relocation and the smallest building in the NHL.  I had a call from someone today asking if I hear of any available tickets to let them know.

CBC:  With ‘Antifreeze in the veins’ Jets Sami Niku makes impact in NHL debut.  He was not the first Finnish defenceman who scored on his first NHL shot in his first NHL game as Joe Pascucci reminds us that back in 1988 Teppo Numminen did the same.

Winnipeg Sun: Jets find a way vs. Canadiens as Connor scores OT winner.  After the Jets built a three goal lead it looked all but over but those pesky Laval Rocket, I mean Montreal Canadiens, wouldn’t back down and they fought back to force OT.  Ken recaps the game from Montreal. 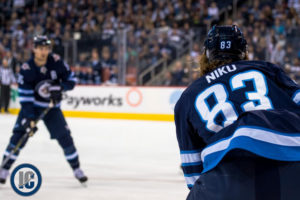 Winnipeg Free Press:  Kyle Connor’s 30th goal gets Jets to 50 wins.  (Paywall).  Some guys go their entire careers without an OT goal and this Jets rookie just scored his third of the year.

Montreal Gazette:  Canadiens rally, but fall in OT to Jets team resting many of its best players.  Give a read to a recap written by a beat writer that covers the Jets opposition to see a perspective of someone who covers Montreal.

The Athletic:  Three things we learned against the Winnipeg Jets.  (Paywall).  Arpon covers the Habs and was watching last night’s contest.  He offers these thoughts following the Jets win.

CBC:  Winnipeg mulling downtown street closure for playoff party.  If it wasn’t still winter I would love this idea.  Joking aside even if it is a tad chilly I still think it would be a cool idea.

Winnipeg Sun:  Separating the men from the boys.  Time to put on the big boy pants and show the world what you are made of.

Winnipeg Sun:  Moose limping toward post-season.  It is fairly easy to pinpoint when the season started to go off the rails for Manitoba and that was when Jack Roslovic was recalled by the Jets at the end of December.  Add to that the recall of a few other key contributors and the Moose have been fighting to stay atop the central  After 133 days that 1st spot was lost to the Wolves.