Note:   The Jets won a “defensive gem” last night in Ottawa where they beat the Senators 6-5 at Canadian Tire Centre.  The team is in Montreal today to finish off the road portion of their regular season schedule with a 6:30 pm date with the Habs.  No morning skate although we will still have a pre-game report at 10:30 am.   Stay tuned throughout the day for any and all Jets news and updates via Twitter |Facebook | Instagram.

Note II:  The Moose have another day of practice ahead of them as they get ready for the final two regular season home games this weekend when they will take on a Bakersfield team that sits second last in the Pacific.  Manitoba needs to win both games not just because they need the points in the standings (which they do) but to help the team’s overall confidence, especially one that hasn’t been winning at home with the same frequency as they have on the road.

Winnipeg Sun:  Five keys vs Canadiens.  Ken’s big matchup is Nikolaj Ehlers vs Jonathan Drouin. His keys to the game include: 1) No rest. 2) Monitor the debut of Niku. 3) Welcome back Steve Mason. 4) Welcome back II Jack Roslovic. 5) Gallagher a bight spot.

Winnipeg Sun:  Jets earn victory over the Senators as road trip continues.  It wasn’t pretty by any stretch of the imagination but the Jets earned a clean two points in Ottawa.  Ken recaps last night’s game.

Winnipeg Free Press:  Wheeler, muckers lead way to victory.  (Paywall).  The 4th line looks like they have a new lease on life after a few games back together again. 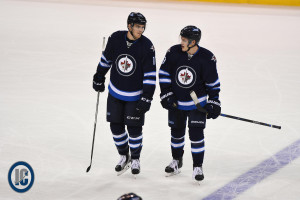 CBC:  Beer-league goalie on Jets’ roster of emergency Winnipeg netminders.  Between Zane Kalemba and Scott Foster this has been quite a year for the emergency backup.

TSN 1260 Edmonton: Jets are Cup contenders now, and will be for years to come.  Pierre LeBrun from TSN and The Athletic joined The Lowdown to discuss the Winnipeg Jets Stanley Cup chances.

TSN 1290 Winnipeg:  Jets could be in double trouble with Laine and Trouba.  TSN’s Bob McKenzie joined the Big Show this morning to talk about Erik Karlsson potentially playing his last home game as a Senator, the Jets matchup Saturday against Toronto and how Winnipeg has to maneuver a pair of contract negotiations this summer with Patrik Laine and Jacob Trouba.

Winnipeg Sun:  Woods makes most of second chance.  It is a fantastic story about a young man who dealt with the most difficult life challenge one could imagine and getting the opportunity to continue to pursue a career that he loves.

Winnipeg Sun:  Hutchinson hits the skids.  It will be interesting to me to see what this week of practice which will allow the team to reset does for them in the remaining two home games of the regular season as well as the final three on the road.