Note:  While the Jets took Sunday off they still made some news with the announcement that they had recalled smooth-skating defenceman Sami Niku from the minors.  He is expected to get his first taste of NHL action in the same way we saw Jack Roslovic and Eric Comrie get last season.  We shall have to wait for morning skate which gets underway at 10:30 am central time if there are any changes to the lineup for Winnipeg.  The Jets pre-game report will bring you up to speed.  Stay tuned throughout the day for any and all Jets news and updates via Twitter |Facebook | Instagram.

Note II:  The Moose also took Sunday off as they reset from a tough stretch.  They are scheduled to practice this morning at 10 am as they kick off a week of practice in preparation for the final weekend of regular season home games.

The Athletic Winnipeg:  For veteran Atlanta transplants like Bryan Little and Blake Wheeler, patience finally paying off in Winnipeg.  (Paywall).  Patience is a virtue but one not often seen in sports (or society in general) where we have become so expectant of instant gratification.

Winnipeg Sun:  Five keys to Jets vs Senators.  Ken starts off with his big matchup which is Jacob Trouba vs Matt Duchene. His keys to the game include: 1) Stay crisp. 2) O from the D. 3) Breaking the drought. 4) Far from Stone Cold. 5) Still producing.

Winnipeg Sun:  Jets GM realizes the next step is even tougher and is not celebrating yet.  Much like the attitude displayed by his team Kevin Chevledayoff knows that while they have achieved a level of success not yet seen around these parts it will hard to take solace in same if they don’t make some noise.

Winnipeg Sun:  Jets captain Blake Wheeler not concerned as reduced ice time has its benefits.  Makes a lot of sense to shave some time now as the heavy minutes will be coming in a few weeks. 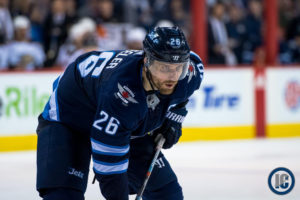 Winnipeg Free Press:  Future not Chevy’s concern now.  (Paywall).  The Jets GM is certainly gonna have some tough decisions and negotiations to make this summer.

Winnipeg Free Press:  May be time to shake up some line combos.  (Paywall).  There are some players that individually are not having the success they may want but with the team firing as well as it seems to be it may be difficult to break up a winning formula.

Globe and Mail:  Leafs and Jets take different routes to playoff readiness.  It will be interesting to watch these two squads in the post-season.

ESPN Twin Cities:  Wild appear to have been dealt devastating blow with injury to Ryan Suter.  Minnesota looks like they could be the Jets opponent (have a three point advantage on Colorado with a game in hand) in the first round and their potential opponent was dealt a brutal blow this past weekend.

Illegal Curve:  Insight into Jets 2017 2nd rounder Dylan Samberg.  He and his Bulldog teammates are still very much alive in the Frozen Four and we had a chat with a beat writer that covers the University of Minnesota Duluth product to give us his thoughts on the Jets 2017 2nd round selection.

Topics: Jets lose in Chicago on Thursday Night to start their four game Road Trip, Jets/Leafs Preview, Is this Jets team the best Jets team ever, 4 Teams, 3 Playoff Spots, 1 week to go: Who will Lose out in the Western Conference Playoff Race.

Topics: Should healthy scratches be eligible to enter a game as a substitute player, James van Riemsdyk and his next contract, Joshua Ho Sang and his relationship with the New York Islanders organization.